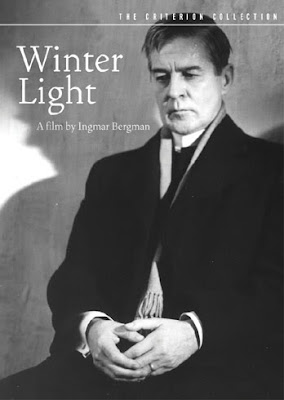 The second chapter in Bergman’s much acclaimed “Trilogy of Faith”, Winter Light is a fierce, austere and distressing examination on religion, faith and despair. This would rank as one of the starkest and bleakest films made by the Swedish master – that’s something given that Bergman was never known for making easy, audience-friendly movies anyway. The film has only three characters worth noting – Tomas (Gunnar Bjornstrand), a middle-aged pastor in a small rural church, suffering from a severe bout of spiritual crisis and emotional turbulence, and tormented by his inability to decide on god’s existence; Marta (Ingrid Thulin), a school-teacher and Tomas’ former mistress who’s almost devotional in her blind love for the seemingly cold pastor; and, Jonas (Max Von Sydow), a suicidal fisherman who somehow seems to the pastor as an extrapolation of his subconscious. Completely bereft of music and shot in static black-and-white, Bergman employed lingering moments of silence, long takes, uncomfortable close-ups, and a desolate surrounding to reflect not just “God’s silence” but also the complex and disconsolate state of the pastor’s mind. The fact that the pastor is a stand-in for the director himself, makes this harsh, superbly-enacted drama that much more poignant and powerful.

This really is one of Bergman's best. But I feel like it gets lost in the shuffle of his more dramatic films. It's definitely one of my favorites.

Thanks Blake. In fact, I've noticed a lot of film lovers naming White Light as the best film in the trilogy. And given the quality of the trilogy, that would automatically put the film very high in Bergman's oeuvre for them.

Shubhajit, you note well the austerity and the staticness of the shots. I always remember the long shot of Ingrid Thulin reading that letter in that long take. One puzzling aspect for me is the ending and I don't think I've ever quite interpreted it correctly. It appears at the end that there is the presence of something- God, grace, awareness....I'm not sure but the ending seems strangely to end on an upbeat hopeful note. It sort of reminds me of near the ending of The Seventh Seal where there is some sort of presence of God or grace at work.

Thanks a lot Jonny. Yes, the ending's ambiguity did confound me a bit too. Since it was a very personal film for Bergman, as perhaps were most of his movies, it is difficult to gauge exactly what the ending signifies. So I guess it'll end up being different things to different people - I guess that's one of the beauties of his works.

Yep, it's one of the bleakest Bergman works for sure, yet it brings to the table some acute autobiographical issues that defined the director's relationship with his own minister father. In John Simon's seminal volume "Ingmar Bergman Directs" the critic names four Bergman films as his indisputable masterpieces - Persona, Sawdust and Tinsel, Smiles of a Summer Night and Winter Light. Simon notes that he disliked teh film on first viewing, but then saw it as a defining work in Bergman's philosophy. I think there are some obvious connections here to Bresson's DIARY OF A COUNTRY PRIEST of course. Bergman's film is mesmerizing and by any baraometer of measurement is one of his most vital works. You have framed it here magnificently, as always.

Thanks a lot Sam for the appreciation. Winter Light, despite its bleakness, contains hope and a quaint sense of coming back to oneself, thus making it a film worth coming back to. And yes, Persona would surely rank among Bergman's best works. I would also include his Wild Strawberries, Cries & Whisper, and Scenes from a Marriage in that vaunted list.