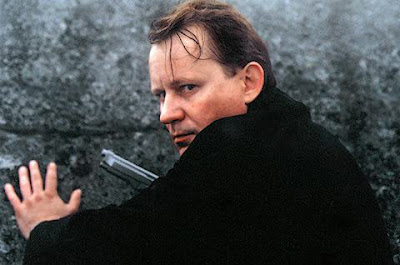 The Norwegian film Insomnia, which was later remade in the US by Christopher Nolan, is a dark and moody psychological thriller that is as gripping as it is quietly unsettling. Jonas Engstrom, a taciturn Swedish homicide cop arrives in a godforsaken Norwegian town to investigate the murder of a young girl; assisting him are his partner Erik, and Hilda, a local cop with a sharp mind of her own. The case takes a turn for the worse when Engstrom accidentally shoots his partner, forcing him to cover it up. We soon enough realize that Engstrom, otherwise revered by his colleagues, is in essence a deeply flawed character. And, to add to that he starts suffering from insomnia on account of the 24-hour sunshine which leaves his cold sense of judgement severely compromised. Thus what ensues is a cat-and-mouse game where the increasingly edgy detective must not just stay a step ahead of his smart antagonist, but also Hilda who starts growing suspicious about him, and not to forget his barely controlled temptations too. The location plays a vital role by adding subtle layers to the storyline as well as Engstrom’s character. The excellently paced film is expertly acted by the cast, led from the front by the veteran Swedish actor Stellan Skarsgard. His superb turn of a man being gradually led to the edge of his sanity by his inability to sleep (and consequently, think rationally), coupled with taut and competent direction, have led this brooding Scandinavian thriller, with quintessentially European sensibilities, to a fine denouement.

Once again you nailed it! I have the Criterion dvd and love this film. When Nolan announced his remake I was excited because MEMENTO was such a good film. But Nolan's revision is atrocious even on its own merits, and pales further when compared to the original.

Thanks Alex. Well, I saw the Nolan version a long time back. Though I wasn't bowled over by it either, I'd still prefer to reserve my judgements on it till I have another viewing of it. After all there are people who even state that the Nolan version was actually better than the original!