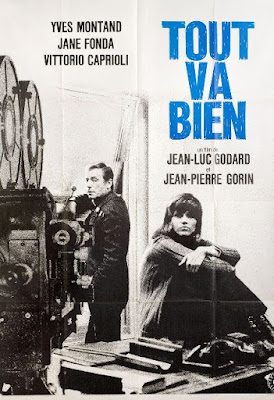 Godard, who’d just survived a near-fatal motorcycle accident, and Gorin achieved the apotheosis of their collaboration with the bold, brilliant, boisterous, trenchant, lively and formally flamboyant Tout Va Bien. It remains particularly arresting in its evocation of Godard’s Nouvelle Vague films – stylistic flourishes, tonal exuberance, iconic stars, ingenious set-pieces and wicked humour – within the distinctive Dziga Vertov Group framework marked by radical left-wing politics, caustic critique of the bourgeoisie and consumerist capitalism, provocative diatribes, and dialectical subversion. After travelling to the UK, US, Czechoslovakia, Italy, Palestine and Jordan, they returned to May’68 four years after that momentous event and in turn A Film Like Any Other with which they’d heralded the DVG phase, while joining hands with two immensely popular actors – Jane Fonda, who’d become an outspoken anti-Vietnam War activist, and Yves Montand, well-known for his participation in leftist causes and films. It dealt with a wildcat strike at a sausage factory where a disenchanted expat journalist (Fonda) and her husband (Montand), a former intellectual who now makes TV commercials, witness class struggle – thus developing bitter perspectives about themselves, their marriage and post-1968 French society – while held captive with the plant’s hilariously buffoonish head (Vittorio Caprioli). Striking turns by the actors and ambitious use of diverse narrative / Brechtian devices aside, it was especially memorable for three aspects – caustic commentary on the commercial dependence of cinema through a deadpan off-screen dialogue accompanied by a plethora of cheques signed towards its production; an unforgettable cut-out set that allowed the entire factory cross-section and goings-on to be seen simultaneously; and an extraordinary unbroken dolly shot where the camera glided laterally across a massive supermarket, observing the gradual brewing of a riot.