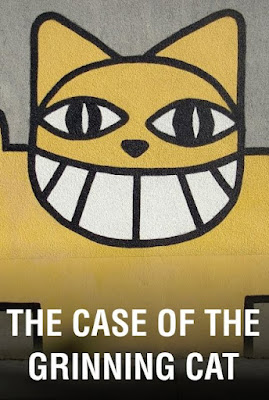 In the otherwise serious, rigorous and formally variegated film A Grin Without A Cat – arguably his magnum opus – Chris Marker had cheekily commented that “a cat is never on the side of power”. This impish aphorism hasn’t just eventually come to define the chosen persona of this reclusive maverick artist, it also tantalizingly provided the springboard over a quarter century later for his beguiling, whimsical, droll, satiric and yet agitational, discursive, piercing and subversive video essay The Case of the Grinning Cat. This fascinating gem, therefore, may very well be considered a quirkier and more freewheeling – but equally politically trenchant – companion piece to his landmark masterwork. This decidedly Parisian and bristling post-9/11 film hinged on a wacky graffiti art called M. Chat, by a mysterious art collective, that seemed to have been popping up all across the French capital – buildings, walls, museums, metro stations, pavements, and as part of various flash mobs and anti-government street protests – featuring a yellow-and-orange grinning cat impudently taunting, confronting and therefore defiantly speaking truth to power. And Marker, true to his love for the feline, even funnily inserted the lively Cheshire Cat into celebrated Van Gogh and Picasso paintings. Thereon he – using his typically off-balancing, irreverent tone – covered a slew of politically incendiary topics, including protest movements by the Left against the abominable Iraq War engineered by Bush and the outrageous banning of Muslim headscarves in France, along with the extreme right raising its ugly head in mainstream French politics in the form of Jean-Marie Le Pen. This experimental piece, therefore, was unabashed in its indictment of war-mongering, the military-industrial complex, Islamophobia and wealth disparity, but with irresistible humour, cutting wit and charming levity.