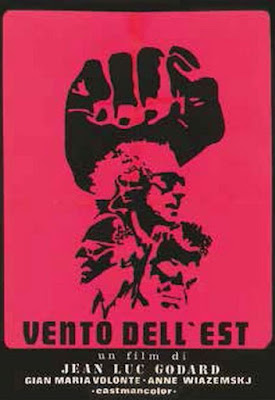 Wind from the East, the first formal collaboration between Godard and Gorin (the release years for the collective’s films are often difficult to pin down, on account of having been made outside studio, distribution and theatrical systems), was a straight-up, unadulterated and undiluted exercise in polemics more akin to a political pamphlet / lecture vis-à-vis a more involving discourse. This rather drab, uninviting work – filled with lengthy diatribe – was also a rarity in the French iconoclast’s canon for being nearly bereft of his off-balancing, tongue-in-cheek humour. And yet, a film of his is never formally dull or intellectually trite or lacking in confrontational posturing, as evidenced by its sly mix of disparate images, genre subversion, outspokenness and lashing critique on both bourgeois hypocrisy and revisionist tendencies. And, like Le Gai Savoir, he also posited his revolutionary ideas on cinema – therefore underscoring DVG’s manifesto about not just making political films, but films politically – albeit without the earlier film’s impish playfulness. It operated along two planes – one real and in the present, while the other in a staged, "metaphorical past – with both deconstructing conflicts between the bourgeoisie, revisionists and militants. The former strand postulated the contrasting interpretations to a factory strike by the three groups – the capitalist class is derisory and hostile, the party bosses advocate moderation, while radical agitators are antithetical to compromise. And this dynamic was then enacted through the parodic artifice of a mock Spaghetti Western filled with types, ideological pedagogy, metatextual devices and interweaving harangue advocating violent counteractions to fascism, racism and oppression. Anne Wiazemsky aside, this experimental featured Italian thespian Gian Maria Volonté who was as known for iconic roles as for his firebrand left-wing affiliations.