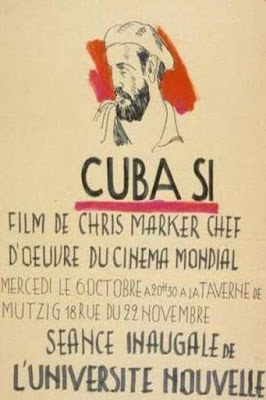 Cuba – like French Indochina before it, and Algeria and Vietnam after – remains a remarkable example for the global south in how a fearless group of rebels, revolutionaries and freedom fighters refused to bow down, dared to fight, and ultimately overthrew an oppressive regime. Cuba Si!, which may perhaps be considered the final film in Marker’s initial period – wherein, like Sunday in Peking and Letter from Siberia, he made a series of highly personalized yet politically sharp travel essays imbued with his signature, idiosyncratic and ironic voice, thus honing a form that he’d make his very own over his prolific career – was his attempt at chronicling the heroic Cuban Revolution and its hope-filled aftermaths upon the establishment of an egalitarian state. The film, therefore, operated at an interesting intersection between documentary, travelogue, political testament and a surprisingly equanimous agitprop. Marker, true to his multi-faceted authorial and cinematic style, approached the subject through diverse lenses. Large sections of it comprised of evocative celebration of this defiant little Latin American country, with the air filled with music, culture, carefree bonhomie, fetes, joie de vivre and comradeship. And these were accompanied by cataloguing of their dream of building Cuba bottom-up – mass literacy campaigns; nationalization of the sugarcane and other key industries to plug the resource drain; citizens’ initiatives; etc. – along with typically free-flowing, voluble, self-effacing and perceptive words of Fidel Castro, the man himself, who’s impishly described as somewhere “between rebel with a cause and leader of the partisan”. Though the poor picture quality was unfortunate, its vigour, spirit and observations were unmissable, given that Agnès Varda too would make a dazzling film on this country inspired by it, viz. Salut les Cubains.