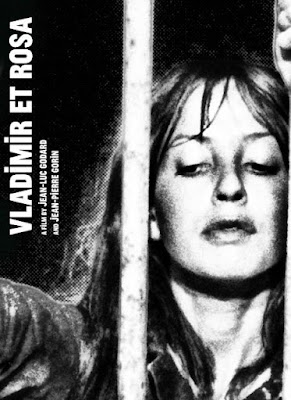 The importance of transitioning from “theory” to “practice” for the left – and thus achieve their revolutionary purpose by supplementing their socialist principles with direct action – formed the undercurrent in Vladimir et Rosa, as it did (albeit, much more overtly) in Struggle in Italy. However, while it had a decidedly serious core – addressing topics of race, violence, exploitation, oppression and tyranny – it was outrageously funny, zany, bitingly satirical, gleefully outlandish, cutting and even gleefully unhinged at times. One might, in fact, say, that Godard packed this with the kind of playfulness, irreverence, irony and humour that one witnessed regularly in his Nouvelle Vague years, and hardly much since British Sounds in his DVG period. Using the “Chicago Seven/Eight Conspiracy Trial” as a vital springboard, it presented a loopy, absurdist trial of six disparate militants, protesters, saboteurs and activists – a hippie (Julie Berto), a woman’s lib advocate (Anne Wiazemsk), a factory working dissident, a student radical, a steadfast pacifist and a Black Panthers spokesperson, along with “Friedrich Vladimir” (Godard) and “Karl Rosa” (Gorin) – in a kangaroo court presided by a cartoonish, brazenly biased judge aptly named Adolf Himmler (Ernest Menzer) who keeps doodling on a raunchy Playboy centerfold. The way Godard/Gorin unabashedly lampooned the establishment and the bourgeoisie – the wealthy capitalist class, along with its principle stooges, viz. the legal system, police and mass media – was both ferocious and farcical, which he complemented with political dialectics, polemics and rhetoric. A catchy heavy rock motif often played out in short bursts, and that, along with the Brechtian setup and roguish tone added further doses of liveliness to the proceedings, while still retaining a politically charged atmosphere laced with dissent, anger and urgency.