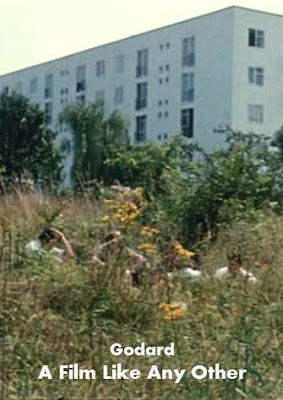 Cinema was as much a medium as it was a weapon for Godard, and that was increasingly and unequivocally accentuated towards the magnificent last leg of his trailblazing Nouvelle Vague years. And, with the closing message in his explosive masterwork Week-end, viz. “Fin de Cinéma”, he announced an irrevocable breach with its conventional confines. He forsook authorship and transitioned into his most politically radicalized period by founding the Dziga Vertov Group – named after the renowned Soviet filmmaking pioneer – along with fellow militant leftist Jean-Pierre Gorin (discussions with him had already played a part when the French enfant terrible wrote his subversive gem La Chinoise the previous year). This overlooked period in his career – wherein, as per their manifesto, they sought to “make political films politically” – was marked by guerilla filmmaking, Marxist and revolutionary themes, championing of anti-bourgeoisie and anti-imperialist stances, and experimental works defined by dense essayistic form and Brechtian distancing techniques. A Film Like Any Other, which formed the first title of this underground, agitprop collective, bore all the quintessential hallmarks that made this invigorating, provocative and intellectually dense in equal measures. This fiercely discursive, dialectical and kaleidoscopic essay, foregrounded on the epochal student demonstrations and massive worker strikes that it was made in the aftermath of, was a free-association treatise on May’68 in terms of what transpired and what it stood for. Godard structured it along two parallel strands – a group of students, whilst in relaxing postures amidst tranquil grassy environs and whose faces we hardly ever see, engaging in dry, rhetorical, crisscrossing discussions analyzing and interpreting the events; and, intercut with that, were riveting B/W documentary montage capturing the May'68 protests, rallies, blockades and police crackdowns.