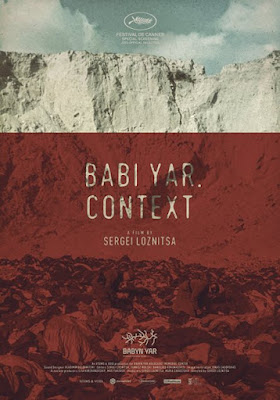 “The past is never dead” in Sergei Loznitsa’s bleak, deeply unsettling and incredibly powerful documentary Babi Yar. Context. In 1941, Nazi Germany committed the horrific Babi Yar Massacre – so named because it was carried out in the eponymous ravine near the Ukrainian city of Kiev – wherein nearly the entire Jewish populace was clinically wiped out. The Einsatzgruppen death squad, with assistance from local militia and police force – alongside complicity of the residents – murdered 33,371 Jews over a 3-day period, while the overall toll during the Nazi occupation is estimated to be upwards of 100,000. Loznitsa, making extensive use of found amateur footage – immaculately collected from various archives where these were buried for decades, and extraordinarily restored over several months – composed a devastating picture of war, violence, destruction and human suffering borne out of fascism, prejudice and hatred. And, in turn, he took a defiant stance on his country’s culpability then and the convenient act of forgetting subsequent to that; in fact, he’d encountered uncomfortable silences all around him surrounding this massacre right from when he was a kid, and that cemented the need to remember and remind through this film. Structured with chronological linearity and presented with a startling sense of here-and-now that placed its viewers right in Kiev eight decades back, it persuasively covered what preceded the genocide and what followed it, including gut-wrenching shots of helpless men and women being beaten and rounded up, the brutal remnants of the horrors, reminiscences on concealment of the crimes and miraculous escapes, and the trial and public hanging of the SS perpetrators by the Soviet Army. This therefore remains a work laced with bold urgency, stark contextualization and profound remembrance.

Kinda timely given the Russians “accidentally” destroyed the memorial to the massacre recently.

It's a kafkaesque world filled with ironies.