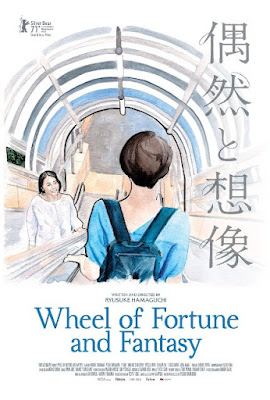 The 2021 award for making the two most diverse films in the same year arguably goes to Ryûsuke Hamaguchi. If his magnificent Drive My Car was an immersive and melancholic work on loss, grief and memories, Wheel of Fortune and Fantasy was instead a thematically lighter and formally playful portmanteau film. In fact, its wry, gently ironic and low-key portrayals of chance encounters, transient relationships, seriocomic interactions, old grouses and the human condition were reminiscent of Rohmer and Hong Sang-soo. Interestingly, while “theatre” formed the central component in the former film, everyday role plays – to camouflage one’s past, evoke reactions and relive old memories – featured here, and this performative aspect provided for an interesting commonality between the two. It comprised of three short episodes stitched together along the above facets. “Magic (or Something Less Assuring)” began with a deceptively relaxed conversation between Meiko (Kotone Furukawa) and her best friend (Hyunri), wherein the latter shares her budding romance with a guy; as it turns out, he was Meiko’s ex, and despite her outwardly bubbly nature, she harbours a lashing spite towards him. In “Door Wide Open” – the best episode of the lot – a married woman (Katsuko Mori) in an affair with a college student is coaxed into entrapping a professor (Kiyohiko Shibukawa); though a surprising kinship develops between them after a saucy game of erotic one-upmanship where she recites an explicit section from his novel, an unfortunate goof-up plays spoilsport. Finally, in “Once Again”, two middle-aged women – an out-of-work IT coder (Fusako Urabe) and an unhappy housewife (Aoba Kawai) – strike a fleeting friendship upon thinking the other as someone they once knew, and decide to continue with that mistaken identity.