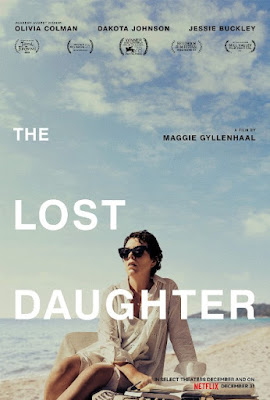 Elena Ferrante’s writings can roughly be divided into two kinds – those with middle-aged women protagonists, and those with young, teenage girls – and they’re all ferocious, magnetic, discomfiting and bold feminist novels that’ve counterpointed messy, tumultuous exteriors with chaotic, implosive interiority. Maggie Gyllenhaal therefore displayed stunning bravado in adapting The Lost Daughter – a relatively less well-known book, but no less emotionally fraught, with knotty intermingling of present and past through heavy blending of a tranquil “now” and difficult, repressed memories – into a commanding, gripping and vividly realized directorial debut. She transplanted the tale’s Neapolitan backdrop – integral to Ferrante’s bibliography – to a Greek island, but otherwise retained its dynamics, narrative flow, and most crucially, candid and unsettling exploration of motherhood in how it need not be intrinsic to a woman’s natural instincts and preferences despite what the society unequivocally preaches. Leda (Olivia Colman) is a middle-aged comparative literature professor and translator who’s come for a leisurely working holiday. Her plans, however, go haywire from get-go thanks to a brash, noisy Italian-American family – possibly with shady links – and in particular Nina (Dakota Johnson), a sultry, sensuous young mother, who, with her teasing vacillations between her menacing husband, clandestine lover and little girl, triggers troubling, guilt-ridden memories for Lida from her own days as a deeply conflicted young mother (Jessie Buckley). As her plans for a quiet holiday and sense of being spiral out of control, she starts losing her composure, poise and sanity too. Colman’s superlative central turn was marvellously complemented by Johnson, Buckley and Ed Harris as a lonely caretaker, as well as by the luxuriant picturization, haunting score and a thrilling dirty dance to Bon Jovi’s Livin’ on a Prayer.