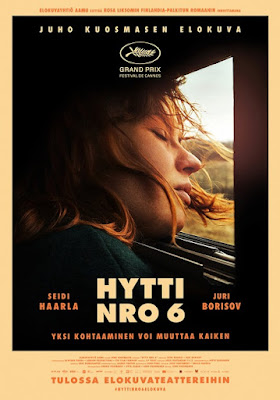 The premise of Compartment No. 6, viz. formation of an unlikely bond between two strangers while traveling on train, had reminded me of Kawalerowicz’s Night Train and Linklater’s Before Sunrise; admittedly, a bit more of the former, as the chances of a Russian movie being tonally closer to a Polish film seemed relatively higher, despite the pointless comparisons to the latter. However, on hindsight, this charming, earthy, offbeat, gently eccentric and delectably anachronistic film was as similar to them as Russian vodka is to Polish lager and American bourbon. Laura (Seidi Haarla) is a Finnish woman fluent in Russian who’s studying archaeology in Moscow and is having an affair with her professor (Dinara Drukarova). The two had planned a rail trip to Murmansk in order to see the ancient petroglyphs there; but when the prof drops out at the last moment – she’s looking at ending their relationship, unbeknownst to her love-struck student – Laura embarks on this massive cross-country journey herself to the sparsely populated and bitingly cold little Arctic town. Sharing her tiny compartment is Lyokha (Yuri Borisov), a rough young miner. The two oddball characters couldn’t be further apart – she’s fidgety, luckless, sensitive and forlorn, while he’s hard-drinking, foul-mouthed, coarse and loutish – and yet, to the director’s credit – and arguably the two excellent actors’ too, in the way they so effortlessly brought forth their characters’ vulnerable and lonely inner cores – they gradually develop a warm, quirky and endearing relationship. The 90’s setting – with its analogue devices, handicam, and electronic music played on Walkman and old car stereos – along with the captivating juxtaposition of claustrophobic interiors with harsh exteriors, made it all the more joyous, melancholic and nostalgic.