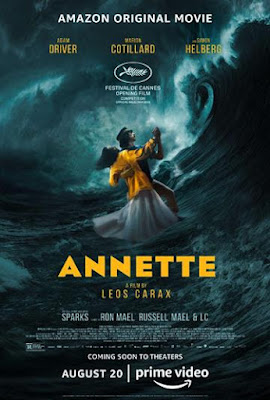 Coming nearly a decade after his previous feature – the manic, befuddling, flamboyantly experimental and absolutely fabulous avant-garde gem Holy Motors – Annette was perhaps a culmination of Leos Carax’s love affair with musical rhapsodies. While they made for memorable sequences in his earlier films, he decided to make a full-fledged musical, or a rock opera if you will, along the lines of an effusive “Classic Hollywood” romantic paean, meets the world of Jacques Demy where even spoken dialogues were sung, meets a twisted fairy tale that was his own. The resulting work – borne out of his collaboration with Ron and Russell Mael of Sparks, who wrote the story and also composed the songs – was, on one hand, maximalist and unapologetically grandiose, while also, on the other, maudlin, superficial and oftentimes uninvolving but for a few bold bursts. Suffice it to say, therefore, that despite infusion of a dark world-view, brooding atmosphere, commentaries on toxic masculinity and consumerist exploitation, and moments of striking sexuality and violence rarely associated with this genre, it was otherwise too simplistic, straightforward and psychologically shallow to create much of an impact. The tale revolved around the tragic relationship between a provocative stand-up comedian (Adam Driver) and famous opera singer (Marion Cotillard) – two people who couldn’t be more different – and the truly weird eponymous kid that they give birth to. An ingenious opening sequence, featuring the song ‘So May We Start’ shot in a glorious single-take, set the ball rolling, but balance songs, for most parts, weren’t as engaging as I’d hoped for. Further, while Driver brought in a raw, destructive energy to the role, it was unfortunate that an actress as talented as Cotillard remained under-utilized.