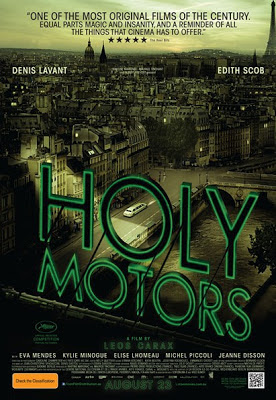 Directed by the cult French filmmaker Leos Carax, and made a good 8 years after his last film Pola X, Holy Motors was a viewing experience like few, or no, others. An incredible, audacious and no-holes-barred experimentation with both form and content, this surrealist meditation on the medium of cinema was also a deeply personal statement on the role of a filmmaker in an increasingly consumerist and technology-driven society. The film’s plot is about Oscar (Denis Lavant), possibly an alter-ego of the director himself, who is traveling in an opulent limousine who seems to be on a bizarre journey – that of honouring 9 appointments over the course of the day, requiring him to dress up and portray a multitude of characters – ranging from bizarre to mundane. As it turned out, Oscar is essentially a phantasm, existing in dream-reality, who is playing diverse characters in various movies cutting across various genres. For film students and cineastes, this movie is like a journey through a plethora of cinematic references – from pop-culture icons to obscure arthouse, as well as symbolisms and techno-political commentary. The beauty of this film, however, lied in the fact that, even those unable to decipher the various references, would still be able to immerse themselves in this fascinating, phantasmagoric and metaphoric experience – such was the viscerally enthralling, visually arresting and gleefully unconventional nature of this alternately gritty, fantastical, stylized and poignant avant-garde work. Though perhaps of little consequence in the scheme of things, Lavant gave an absolutely tour de force performance, while the production values, too, were excellent.

"An incredible, audacious and no-holes-barred experimentation with both form and content, this surrealist meditation on the medium of cinema was also a deeply personal statement on the role of a filmmaker in an increasingly consumerist and technology-driven society."

Now that is a mouthful Shubhajit! You superbly encapsulate and interpretate the film's meaning and artistry! Denis Levant is absolutely extraordinary, the use of the songs is melancholic, and it's clearly as imaginative and thought-provoking a film I've seen this year. Yeas this is now Carax's piece de resistance, and it was a special treat to attend a screening where the director delivered a perceptive Q & A. He did seem like he was under the weather a bit, he infused his talk with some personal revelations, admitting the 'melancholy' was part of his life.

Thanks a lot Sam. The film festival crowd in Calcutta was really abuzz with this film - particularly the film students. So me, and many others, didn't dare miss it, though we all went hoping that the film doesn't turn out over-hyped. Fortunately, it lived up to its reputation among its cult followers, and loved this delectably confounding piece of work.

The sequence where Oscar & a group of people walk across the Parisian streets playing accordion, drums and all, was was my favourite section from the point of view of music - it was really brilliant.

Great to know that you got to attend a Q&A session with Carax - can imagine what a pleasure it must have been.