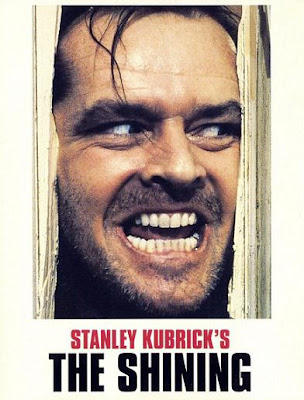 My reaction to The Shining had been rather ambivalent upon my first viewing of it many years back, but that changed dramatically (in the positive direction) upon revisiting it – in that sense it would have company such classics as Gold Rush and Annie Hall, among others. Adapted from Stephen King’s novel, Kubrick gave his own spin to the classic "haunted house story" in this brilliant psychological horror film by providing an intensely disturbing exploration of paranoia, madness, the devastating effects of claustrophobia and complete isolation from civilization, and the primordial beast that oftentimes lies just underneath a man’s seemingly placid and civil veneer. Jack Torrence (Jack Nicholson), suffering from an acute case of writer’s block, takes the job of being the winter caretaker for an enormous luxury hotel with a morbid past, in order to use the ample free time and solitude for the purpose of writing. And so he arrives at the palatial Overlook Hotel with Wendy (Shelley Duvall), his vulnerable and compliant wife, and Danny (Danny Lloyd), who seems to possess psychic abilities. Expectedly, the isolation gradually starts taking its toll on the volatile Jack, thus leading the family towards a spectacular eruption of gruesome violence and tragedy. Nicholson gave a startling and gleefully over-the-top performance as a man moving ever closer towards complete mental disintegration, while Duvall and Lloyed too were very effective. The film’s most memorable aspect would certainly be its astounding cinematography, camerawork and visual design – the spectacular tracking shots, dazzling color compositions and the deeply discomfiting sense of symmetry, imbued it with an incredibly ominous atmosphere. The pacing and the ensuing tension buildup, too, were riveting.

A brilliant psychological horror film indeed, and one in the Kubrick pantheon that continues to gain in reputation. A few even go as far as to have it at or near the top of his output. Dazzling filmmaking, some striking set pieces (the maze, the freezer entrapment, the eerie snowstorm) and a film one could watch over and over. it's extremely popular in my house. Nicholson is chilling, and the others including Shelley Duvall, Scatman Crothers. and Danny Lloyd are superb. A Halloween favorite, but so much more than that.

Thanks a lot Sam. Yeah, a lot of Kubrick aficionados consider Shining as their favourite Kubrick film. Visually, this was absolutely stunning - one could write essays on its visual design, cinematography & camera work. Even its sense of mood was quite amazing. And what can one say of Nicholson - he's one of my favourite actors of all-time.