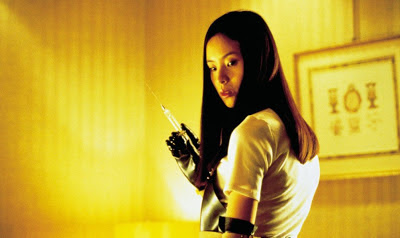 Takashi Miike would easily rank, along with the likes of David Lynch, David Cronenberg and Gasper Noe, as one of the most polarizing contemporary filmmakers. As my introduction to this notorious Japanese agent provocateur, I ended up making a wise decision by starting with Audition. In fact, if someone isn’t aware of Miike’s love for “extreme filmmaking”, the movie can really take one for a ride; it opened on a deceptively sedate, charming and heartwarming note, and went for the crazy fifth gear only during its final leg. Aoyama (Ryo Ishibashi), a middle-aged widower, upon some prodding by his teenaged son, decides to start dating women. His friend proposes a unique idea for finding his match – an audition, which he eventually agrees to. He quickly finds himself attracted to one of the applicants, Asami (Eihi Shiina), a mysterious and vulnerable looking young woman, and soon starts dating her. Miike slowly, and quite cheekily, start posting a clue here and a hint there that Asami might not really be just a cute, lonely girl. And then, in one unforgettable scene (the one where she picks up her phone in her dank apartment, with a sack suddenly taking a leap behind her), the eeriness surrounding took a very real form, thus leading the film to its gleefully violent, sadistic and bloody climax. Nonetheless, for most parts, the movie managed to be a fine exploration of urban loneliness, coping with deep scars (both physical and psychological), and the commoditization of women. The final third or so, in comparison, was one hell of a psychedelic, nightmarish and deliberately surreal ride through pain, pain, and well, more pain.

My theory is that "it's all a dream." Which is normally a cop-out, but in this case I think a brilliant psychological twist. If what happens is unquestionably real, then it's simply a grisly shocker.

If it may be in the hero's mind, that it's both a brilliant exploitation and a fascinating exploration of misogynistic paranoia. And, in a way, it means the character's real horror is not of this mysterious girl, but at himself both for his manipulative "casting" process and perhaps his moving on so voraciously after his wife's death. She is kind of the projection of his own self-hatred I think.

When I heard that the scene where he wakes up in bed wasn't meant to be him waking up (and then returning to bed) but rather some sort of flashback I was disappointed. Regardless of what was intended, I'll stick to my reading!

In fact, I too felt that it's probably all a dream - it all happens in his mind. His sense of guilt makes him go through the self-retribution process subconsciously - all compounded by his paranoia for the unknown. The flashbacks, therefore, were the protagonist's creation based upon the bits that he knows about the girl. Interestingly, a support for this reading would be that, even though he is brutally battered by the girl, his son escapes unscathed - his deepset love for his son prevents his subconscious being allowed to him being bruised as well.

All said, it really was a darn interesting film, with Miike having a whole load of fun with his audience's. Thanks a lot Joel for sharing your theory :)