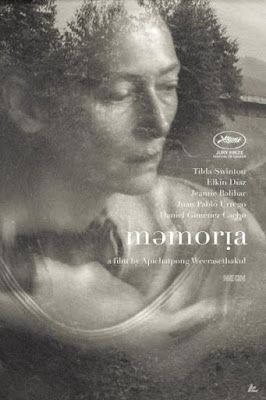 Celebrated Thai auteur Apichatpong Weerasethakul retained his thematic preoccupations and formal signature from Uncle Boonmee Who Can Recall His Past Lives –tranquil, eerie, leisurely, befuddling, allegorical and ethereal explorations of the overlaps between dreams, memories and existence, through a narrative that’s both spare and oblique – in Memoria, his first directorial venture outside his country. It was therefore a similarly hypnotic, confounding, meditative and mystical work filled with curious vignettes, existential inquiries, political undertones and magic realism that defied easy and coherent explanations. Jessica (Tilda Swinton), a British expat living in Colombia – a country with similar flora and fauna, as well as history of state-sponsored and military-led violence – is suddenly woken up in her apartment by a sonic boom that she’ll keep hearing at different places even though it isn’t audible to anyone else, thus leaving her disoriented and perplexed. That takes her on a strange aural journey, including to a guy in a recording studio – who no one else seems to know – to recreate that sound, and thereafter to mysterious man with the same name who remembers everything in his life and even beyond, and therefore lives a solitary life in the Amazon to avoid information overload. Meanwhile she also visits her sister who’s hospitalized in Bogotá with a mysterious ailment – which they assume could be due to a tribal curse on account of a road being constructed through an ancient burial ground – experiences a terrific impromptu jazz jamming session, and visits a friend at an archaeological expedition site, amidst the various enigmatic occurrences surrounding her. Unbroken long takes, extended moments of silence, beautifully textured visuals and Swinton’s understated presence further added to this exquisite piece of slow cinema.