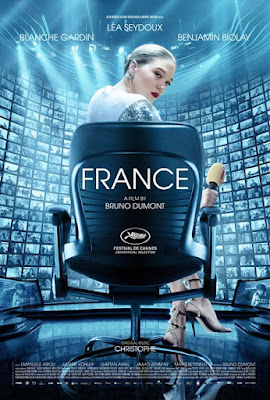 French provocateur Bruno Dumont, in his loftily titled film France, created an unapologetically scabrous and pungent satire on toxic media culture, vapid celebrityhood, and the performative nature of political discourse – and the self-serving attempts at opinion making thereof – on subjects which are otherwise as serious as war, refugee crisis, political populism and domestic violence. And yet, despite the black humour and acerbic irony that pervaded this casually flippant and incendiary film, there were underlying layers of empathy, spiritual crisis and existential dilemma at its core – and the tussle between these contradictory facets made it a bold, saucy and intriguing work. The film’s eponymous heroine (Léa Seydoux) is a brash, cocky and enticing star TV journalist who’s super popular, successful and influential. In one brilliant set-piece after another we see her confronting her subjects – the movie began with a hilarious mock-grilling of Macron at a press conference –, staging debates – commandingly presiding over ostensibly aggressive panellists –, and creating stories – doing multiple retakes and ensuring the right camera angles while in war zones and during rebel interactions, switching between crowded refugee dinghy when on camera and her yacht when off, getting interviewees to open up about intensely personal details through faux empathy, etc. Her carefully calibrated life, and in turn her glib veneer of artificiality, start crumbling upon a minor accident involving an immigrant working-class guy; as a domino effect ensues, her vulnerabilities, insecurities and the sham that defines her existence start getting exposed. Seydoux was at front and center with a stunning performance – alternatively flamboyant, arrogant, tough, manipulative, sly, petulant and fragile – while the classical looking narrative was laced with a slick, hyper-polished exterior and moments of deliberate melodrama.