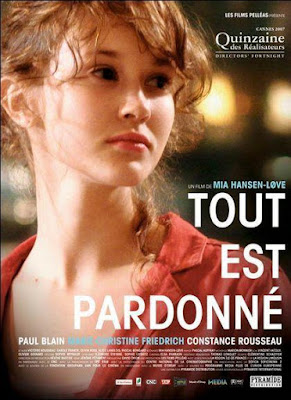 All the distinctive aspects of Mia Hansen-Løve’s filmography – themes of fragile familial bonds, estrangement, loss, reconciliation, and passage of time; tonal palette laced with subtlety, understated storytelling and pathos; and a style devoid of expositions, bereft of manipulations and stripped of sentimentality, while still simmering with emotions – were vividly and exquisitely discernible in her sublime debut feature All Is Forgiven. Heartwarming, poignant, disarmingly real, affecting, sensitive, quietly existentialist, balancing the mundane with the poetic, and filled with moments of joy interspersed with pervading melancholy – it’s quite remarkable that she wrote and directed a work of such startling maturity and depth, and in the process also established her voice as an auteur, at the young age of 25! The narrative was roughly broken into two halves wherein the POV casually shifted from the father to the daughter; it therefore formed a lovely companion piece to her excellent next film Father of My Children where she’d switch the POV from the father to the mother to the daughter; notably, in all her subsequent films so far, the POV has broadly accompanied a single protagonist. The first half focussed on struggling Parisian poet Victor (Paul Blain) who’s suffering from terrible existential malaise and self-loathing, exacerbated by his addiction to drugs; thus, though he loves his wife Annette (Marie-Christine Friedrich) and young daughter Pamela, things inevitably rupture irrevocably. The second half, set eleven years later, shifted focus to Pamela (Constance Rousseau) – now a strikingly beautiful young woman – who reconnects with his dad after many years of living with vague memories of him. Deftly filled with delicate touches, naturalistic turns and bluesy folk songs, this was an achingly intimate work imbued with heartbreaking impermanence.