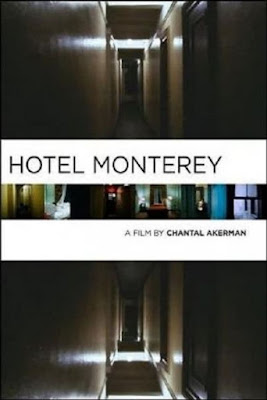 Intensely personal, formally rigorous, complex and deeply ruminative inquiries into disaffection, dislocation, isolation and existential ennui – elements that would distinctively define Chantal Akerman’s filmography – started getting shaped during the 1 ½ years she stayed in New York as a 21 year old, where she was hugely influenced by the structural film movement. And these facets were vividly discernible in her boldly experimental and quintessentially minimalist feature-length debut Hotel Monterey. Filmed in the titular 1914 hotel – a seedy, lonely, run-down Upper West Side hotel which she sometimes frequented – it was shot over fifteen straight hours, over the course of a single night which extended into the dawn. This seemingly aimless work involved quietly exploring the foyer, elevators, passages, rooms, windows and balconies of this melancholic place; and it ended with glimpses of outside – as seen from inside – covering the Hudson River, grimy concrete buildings and the Manhattan streets. These vignettes were captured on grainy images through immersive long takes and a mix of steadfastly static and gently gliding tracking shots; further, most interestingly – and this made it even more radical in its conception and design, while also emotionally distancing to some extent – it was eerily and completely devoid of either ambient or non-diagetic sounds, thus making this perhaps more silent than many a silent film even. What emerged, as a result, was an intimate and observational piece of cinema where visceral responses to the mundane, monotonous images were foregrounded, therefore making this a tantalizing interplay between documentary, essay and even understated drama. Despite its physical interiority, it can very well be considered an introductory companion piece to her next New York film – the magnificent, masterful and haunting News from Home.