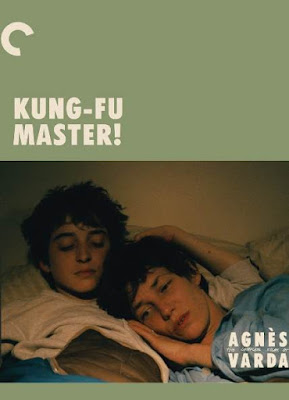 Varda has often pushed cinematic boundaries – be it politically, formally or aesthetically – but arguably never as much as she did in her exquisite and daring but scandalous Kung-Fu Master! Though a companion piece to Jane B. par Agnès V., the two films couldn’t be further apart given the latter’s kaleidoscopic, eccentric, wildly experimental quasi-documentary form, as opposed to this intimate, tender, bittersweet and enormously unconventional romantic drama. From that perspective the pair reminds one of another duology she made shortly before while in LA, viz. the exuberant documentary Mur Murs and the sedate family yarn Documenteur. This understated tapestry revolves on a taboo relationship that develops between Mary-Jane (Jane Birkin), a soft-spoken, emotionally fragile British-French divorced woman who lives with her two daughters – teenaged Lucy and little Lou (played by her real-life daughters Charlotte Gainsbourg and Lou Doillon, respectively) – and a precocious but essentially vulnerable adolescent boy, Julien (played by the director’s son Mathieu Demy), who’s a classmate of Lucy’s and loves playing the enormously popular arcade game that gave the film its title. Adapted from a short story that Birkin had secretly written and confided only to her friend Varda, it was particularly remarkable for being so radically disarming, delicately strung and beautifully ambivalent despite the moral quandary in its provocative subject, and was bolstered by a brave, stupendous and heartbreaking turn by Birkin and a surprisingly affective, rascally one by Demy Jr. Interestingly, in keeping with the film’s spirit, its real-reel divide was further obscured by casting Birkin’s actual parents too (Judy Campbell and David Birkin). The narrative, incidentally, had an on-off commentary on AIDS which Jacques Demy, ironically, would tragically succumb to two years later.