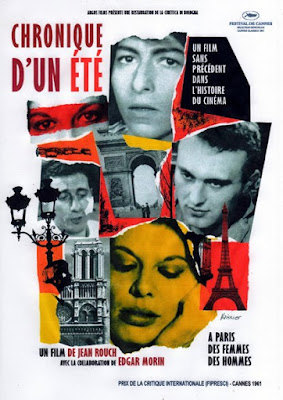 In 1960 sociologist and influential cine-theorist Edgar Morin and pioneering ethnographic filmmaker Jean Rouch – both were avowed leftists and anti-colonialists – collaborated on what’d become a seminal film blending social examination, political activism and formal fluidity. In its coinage of cinéma vérité and linkage with the direct cinema movement; amalgamation of ingenious handheld “walking-cameras” and “live” sync-sound techniques that’d revolutionize documentary filmmaking; and freely blurring the lines by placing real people engaging in faux settings, Chronicle of a Summer remains a perceptive, prescient, wry, radical, audacious and landmark work that influenced cinematic language and form like few films have. It starts with a disarmingly simple and yet deeply ambivalent question to Parisians, viz. “Are you happy?”, as a springboard for pointed inquiries into how they live, interact, experience, interepret, assimilate and contextualize; that the subjects were blue-collar workers, immigrants from French colonies in Africa, students, etc. imbued them with additional meanings. Further, they were made even more complex – though these contexts weren’t made explicit – by the fact that France’s colonial empire was fast crumbling; one participant, Marceline, was a Holocaust survivor; she and her former boyfriend, Jean-Pierre – another participant – were members of a militant antiwar group with ties to Algeria’s FLN; a 3rd participant, Régis Debray, wold join Che Guevara and thereafter languish in a Bolivian prison for 3 years; and another one, Marilù, would become an iconic photographer at Cahiers du Cinéma. The film was a fascinating, self-deprecating autocritique too; when, upon a screening of the filmed interactions some participants are either overly moved or berate what they either deemed phony or uncomfortably revealing, Morin and Rouch are sardonically compelled into re-evaluating their experiments in a new light.