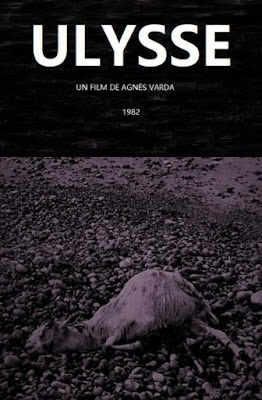 Before she became a nonconformist Left Bank filmmaker, irreverent ciné-essayist, gleaner of experiences and frequenter of flea markets, Agnès Varda was a passionate, professionally trained photographer; and this facet of hers achieved its apotheosis in her remarkable short documentary Salut les Cubains, a montage of the dazzling B/W photos she’d taken in Castro’s Cuba. What remains among her best known pictures – and one she was clearly immensely fond of – was a stark, haunting 1954 photograph that she’d taken in Calais. The titular composition comprised of three figures on a desolate beach – a naked standing man facing the sea, a toddler facing the camera and a dead goat. In her short but surprisingly multi-layered essay film Ulysse she disarmingly meditated on it from three inter-related aspects, viz. the image itself, memories of the image and the sociopolitical context when it was taken. In the first thread she analyzes the photo from different aspects, including her experience of shooting it. In the second thread, and arguably the most intriguing of the lot, she speaks to her subjects – the man, an Egyptian, who’s now an editor at Paris Elle; the eponymous boy, Ulysses Llorca, whose parents were refugees from the Spanish Civil War, who now owns a bookstore, and very uncomfortably reveals his lack of memories about the picture though he’d made a drawing out of it as a kid; and in turn his mother whose memories haven’t faded. And, in the final thread, she ironically contextualizes the specific time when this was taken, which was marked by France’s defeat at Dien Bien Phu which’d pave way for the collapse of French colonialism at Indochina, as also the rise of television there.