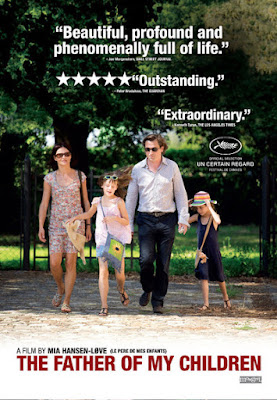 Mia Hansen-Løve’s second directorial feature Father of My Children – exquisitely laced with love, warmth, sensitivity, pathos and reconciliations – was a work of stunning dexterity, restraint, maturity and confidence; she was, quite startlingly, just 28 when this released. The fact that life inevitable goes on – sandwiched between small joys and devastating losses, and filled with long stretches of perplexity and ennui – formed its key underlying tenet. In an assured narrative choice, its POV gradually transitioned across three characters. It began with the focus squarely on Grégoire (Louis-Do de Lencquesaing), a producer who deeply loves the movies he helps make, lives an intensely hectic existence literally shuttling between work – existing and prospecting filmmakers, young talents, crew, assistants and even bank – and his closely-knit family comprising of his stern but loving wife Sylvie (Chiara Caselli) and three sweet daughters, including the emotionally confused teenager Clémence (Alice de Lencquesaing) who’s the eldest of the lot. His film company, however, is bleeding and on the verge of collapse due to insurmountable debts, and tragedy inevitably strikes before long. The perspective then transitioned to Sylvie who decides to briefly take reins with the futile hopes while still in grieving. The focus, finally, shifted to Clémence’s coming-of-age while striving to understand her father and befriending a young filmmaker who’d been assured production of his debut work. The bittersweet finale where mother and daughters, who’re leaving Paris for good, must unfortunately but unavoidably cancel a final visit to Grégoire’s grave as they’re late for their flight, delicately capped the film’s deftly understated theme. It’s worth noting that it was based on Humbert Balsan who’d intended to produce Hansen-Løve’s sublime debut feature All Is Forgiven but tragically committed suicide.