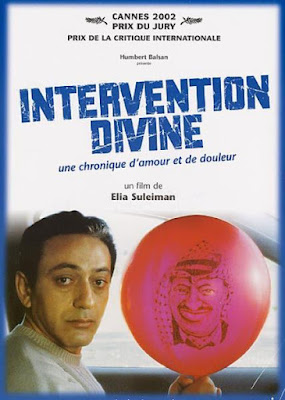 Elia Suleiman’s second feature film Divine Intervention was as episodic, fragmentary, ironic, deadpan and riotously experimental as Chronicle of a Disappearance; it was also zanier, weirder, more fantastical and provocative, and had a comparatively more definitive central narrative strand too. They, along with his masterful It Must Be Heaven – with their disjointed form; mix of dry existential crisis with “theatre of the absurd”; and the director’s presence as a taciturn, befuddled observer in a world run amok in an endless cycle of uprootedness, oppression and alienation imposed by an intensely apartheid, discriminatory state – made them a unique, tantalizing trilogy. Further, its bold amalgamation of hilarious, surreal and exaggerated sight gags with bleak, discomfiting political overtones reminded me of Kusturica’s signature style. Like the magnificent Michel Khleifi documentary Fertile Memory, this too oscillated between Nazareth, where Suleiman lives, and Ramallah, where an enigmatic and striking Palestinian woman lives; they often meet – to silently spend long romantic moments together – at the military checkpoint manned by pompous Israeli security force. Their aimless love story is counterpointed with tableaux that were poignant, oddball and crazy – the director’s dad, upon becoming gravely ill, is admitted in a hospital where, at nightfall, all patients roam the corridors smoking; cars regularly stop at a café for a fight between the men travelling together; a man surreptitiously throws garbage inside his neighbour’s property every morning; Israeli army hypnotized by a Yasser Arafat balloon; a moment of wild fantasy where the target for shooting practice – representing Palestinian resistance – converts into a ninja-like wonder-woman who eliminates the dazed Israeli death squad, etc. The film’s eclectic soundtrack – comprising of tunes by artists from across the world – was darn irreverent too.