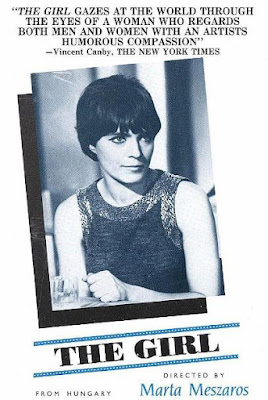 Márta Mészáros, best known for her extraordinary, semi-autobiographical Diary Films – viz. Diary for My Children, Diary for My Lovers, Diary for My Mother and Father – made a deceptively assured and psychologically astute feature debut with The Girl, after spending many years making docu shorts. Incidentally, this was possibly the first feature-length movie to have been directed by a woman in Hungary. She once quipped, “I tell banal, commonplace stories, and then in them the leads are women—I portray things from a woman's angle”; this proclivity for blending politics and feminism into understated, quietly told, personal stories was immediately discernible in this tale of a young, disaffected, conflicted working-class woman in an existential flux. Szõnyi (played by Hungarian pop star Kati Kovács) has grown up in an orphanage and works in a factory in Budapest. She regularly posts ads in order to find her biological parents, and hence when she gets a letter from the woman who’d given her up two decades back, she promptly travels to a small village in order to finally meet her. However, to her disappointment, her mother expresses dissatisfaction upon her arrival, and even refuses to acknowledge Szõnyi as her daughter – possibly for having conceived her out of wedlock – to her domineering husband and teenaged son. Two other chance encounters defined the film – a young guy who she briefly relents to after being cold to his constant overtures, and an aged gregarious man who claims to have known her parents but might not be truthful about his own identity. Kovács’ cool, detached and enigmatic turn made Szõnyi such an intriguing character, and was backed by sparkling B/W photography and a spattering of jazz music.