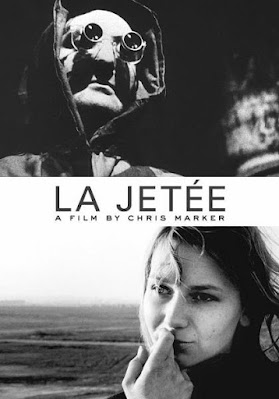 It’s as much a testament to its astonishing formal bravura as its striking political prescience and fatalist melancholy that La Jetée – despite a runtime of only half-an-hour – remains a seminal work of cinema, and in turn the iconoclastic Chris Marker’s single most celebrated work. Rarely has a film, let alone a short – and that too one as flamboyantly avant garde and sublimely ambiguous – achieved such timeless impact; in that context, Dziga Vertov’s dizzying Man with a Movie Camera, Keaton’s Sherlock Jr. and Buñuel’s Un Chien Andalou are three landmark films that immediately come to mind for having achieved popcultural posterity despite virtuoso experimentation. Impishly classifying itself a “photo roman”, it’s composed in the form of a montage of stunning high-contrast, grainy, evocative B/W photographs – the kind that Marker’s friend and fellow Left Bank auteur Varda, immensely inspired by this, would do a year later in her dazzling photo-memoir Les Salut Cubains – and that imbued it with haunting unreality, further heightened by its post-apocalyptic doom, visceral sci-fi terror and recursive narrative. It’s set in the aftermath of WWIII and nuclear holocaust which have turned Paris into radioactive debris; the survivors, as a result, are forced to live like rats in the underground sewers. There a Dr. Frankestein is researching time travel by conducting hideous human experiments, and their latest subject is a man (Davos Hanich) profoundly haunted by pre-war image of a woman (Hélène Châtelain) at Orly Airport’s titular pier. Memory in its myriad complexities and expressions, therefore, formed its central theme, as did recollections from the WWII, including eugenics and other monstrosities that Nazi scientists had conducted, and maybe even doomsday paranoia that the Cold War engendered among many.