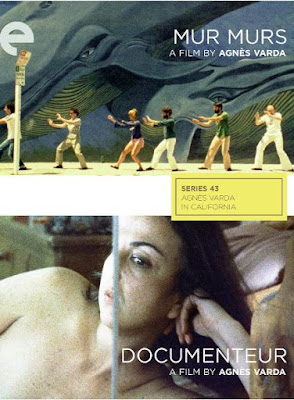 Agnès Varda wasn’t just an extraordinary documentarian, memoirist, social commentator and chronicler of those living in the margins, she was also a pasionate ethnographer and practitioner of the bricolage essay form. Mur Murs (the title references murals, while also playing on “murmurs”) – made during her second California stint while on a temporary break with Demy – was a quirky, perceptive, socially conscious and delectable encapsulation of her lovely, diverse, pluralistic side. In LA, the city of angels, there’s a whole world beyond the glitz and affluence of Hollywood, and hence, unsurprisingly, these myriad, subterranean shades sparked her interests enormously. And, her emotional investment was manifested by focusing on the city’s dizzying, dazzling, delightful, dramatic, dissenting and defiant street art, capturing a wide array of themes – gang violence, ghettoization of poor immigrants and ethnic minority, preservation of the Chicano heritage, assimilation of former convicts into the society, etc. – along with teasing critiques on consumerism, gentrification, reckless real estate explosions, religious balderdash and ignoring artists who operate outside conventional art galleries. Thus, over the course of the docu – shot in edgy, low-quality home video, filled with an idiosyncratic score (including a punk rock performance), and filmed largely around the city’s working-class, ethnically diverse barrios – we see the paintings, hear from the street artists, and understand the contexts and symbols. The 1500-feet Tujunga Wash murals created by former convicts and led by feminist Chicana artist Judith Baca – akin to Berlin’s East Side Gallery –– arguably formed the epitome of this proletarian and rebellious artform that, as Varda eloquently explains, is a stirring expression of existence. The thread of street art, by the way, also makes this a fascinating dyptich with her magnificent Faces Places.