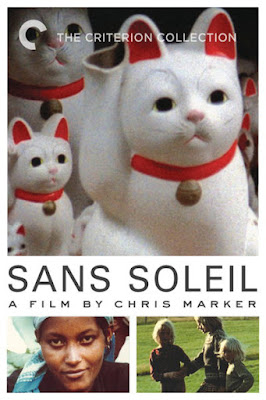 The two most celebrated creations of maverick, reclusive and globetrotting audiovisual essayist, documentarian and Left Bank icon Chris Marker, viz. La Jetée and Sans Soleil, were made two decades apart; and, while they couldn’t be more different – a haunting photo-roman vis-à-vis an epistolary essay film – they were interestingly connected by the themes of of memory, their meditative natures, and their trailblazing audacity. Cerebral, idiosyncratic, discursive, confounding and intensely personal, this was a work – rambling rumination, quirky travelogue, complex treatise and free-form experimentation –marked by its defiant refusal to be easily categorized, pigeonholed or explained. The film is narrated by an off-screen woman who’s seemingly reading out loud letters written by Sandor Krasna (essentially an alias of Marker himself) who’s sharing his myriad experiences, observations and reflections from his many travels around the world; and that’s accompanied by low-quality and yet strikingly prescient colour videos and an eccentric electronic score. At one point Marker wryly observes, “I’ve been round the world several times and now only banality still interests me… On this trip I’ve tracked it with the relentlessness of a bounty hunter”, and this interplay between the profound and the mundane, interesting and ordinary, and words and images, made this such an intriguing, captivating and kaleidoscopic collage of people, places, ideas and impressions. It’s book-ended with shots of three smiling, carefree kids sauntering somewhere in Iceland, and in between Marker takes us from Japan (a country he’s both flummoxed and fascinated by, due to its beguiling socio-cultural fixations and complexity) to Africa (specifically the two impoverished, former Portuguese colonies of Cape Verde and Guinea-Bissau), via a detour to San Francisco (courtesy his obsession with Hitchcock’s compulsive masterpiece Vertigo).