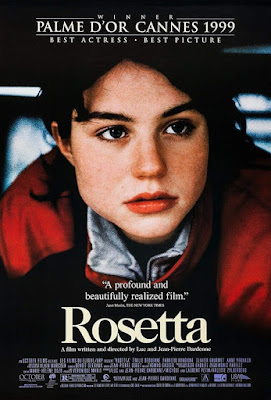 The Dardennes crafted a searing examination on unemployment – and the ensuing angst, frustrations, helplessness, ignominy, desperation, disillusionment and despair – with their grim, gripping and fiercely unsentimental film Rosetta. In a way, it may be considered thematically connected to their gut-wrenching gem Two Days, One Night, in how the respective protagonists – an impoverished girl living in the margins in the former, and a working-class woman struggling to hold on to her life in the latter – are willing to do what it takes, including swallowing their pride and self-respect, while trying to hold on to their jobs where they’ve been deemed redundant. The titular Rosetta (Émilie Dequenne) is a feisty, surly, volatile, emotionally fragile 18-year old living a disenfranchised existence in a shabby trailer park with her alcoholic mother (Anne Yernaux); the film begins in media res as she loses her composure upon being let go, and later fighting with her mom for earning small favours through promiscuity; that she often suffers from bouts of abdominal cramps made her struggle ferociously physical too. In a moment of rare tranquility she befriends Riquet (Fabrizio Rongione), who works at a waffle stand, after he helps her get hired by his boss (Olivier Gourmet) and later briefly charms her at his cramped little flat; in a heartwarming moment, she even smiles. Happiness, unfortunately, is ephemeral at best and illusory at worst, and things soon tragically crumble, nearly leading her to the brink. Dequenne provided a blazing turn and Rongione was good too; and they were brilliantly accompanied by the Dardennes’ minimalist and relentless cinema vérité rigour, including frequently resorting to hand-held cams, which added layers of visceral edginess to the steadfastly bleak proceedings.