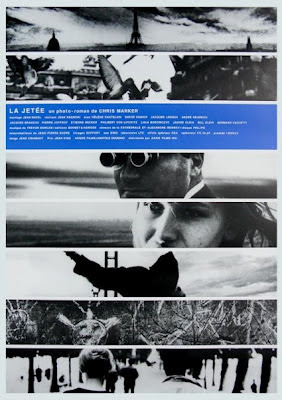 Meditations on time, memory, mortality and time travel, at the backdrop of a dystopian future, have been a much tried exercise in the sci-fi genre. Legendary documentarian Chris Marker memorably compressed those philosophical discourses into the landmark 28-minute short film La Jetée. An audacious and avant-garde experiment on form, this remarkable “personal essay” was made entirely of still photographs (but for an unforgettable and eerie ‘blink’). Set just after WWIII in a post-apocalyptic future in demolished Paris where survivors are forced to reside in the undergrounds in order to avert nuclear radiations, the film chronicles the human experiments conducted by the victors of the war on the prisoners. The film’s nameless protagonist (Davos Hanich), on account of his vivid memories, especially the image of a beautiful lady (Hélène Chatelain) by the pier seen when he was a kid that perennially haunts him in his dreams, make him the perfect guinea pig for the experimenters. And thus starts his fascinating journey through the past and the future, and an affecting love affair with the woman he has had only a glimpse of once, leading the film to a wonderfully concocted finale. The brilliantly photographed and framed, grainy, and high contrast black-and-white images, added splashes of expressionism while also lacing the tale with nostalgia and melancholia. The film is also sans any dialogues, which was perfectly in line with Marker’s narrative choice – a male voice-over, coupled with an orchestral score, drove the fragmented story forward. Among the legacy left behind by this pioneering work, Terry Gilliam’s 12 Monkeys counts as perhaps its most direct influence.
p.s. This is an earlier review. My latest review can be found here.

A very timely post Shubhajit, and in consideration of this great artist's most popular work. Yes this expressionist work has an aching melancholia and a striking way of presenting the film in voice over with orchestral score. Once seen the film is unforgettable. Terrific review here!