Everything You Always Wanted to Know About Sex, But Were Afraid to Ask [1972] 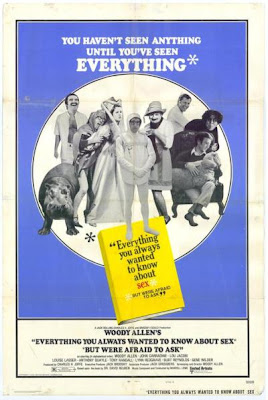 This early Woody Allen film (his fourth directorial venture and sixth as a writer), made before he attained stratospheric fame with Annie Hall and Manhattan, was a parody on the notorious bestselling book of the same name by Dr. David Reuben. The film, which was dived into seven segments titled after the chapters in the book (that’s where the similarities between the two ended), was quite uneven, and oftentimes too grotesque and bizarre. But, that said, it was also a highly original piece of work, and had its moments of creative brilliance and spark which, on hindsight, proves that Woody was still coming to terms with his genius for writing. As can be expected, nothing was held sacrosanct as everything from mundane to kinky came under the gleeful purview of this absurdist and unapologetically in-your-face film. Among the more memorable segments, one was about a mild-mannered doctor (very well played by Gene Wilder) who falls in love with an Armenian sheep; one was on a retro TV show (hosted by Jack Barry) where the viewers get to live their perversions; while another was about a middle-aged man with a closet fetish for cross-dressing. Woody acted in a number of vignettes, including what easily was the best and the most ingenious of the lot – the various organs of the body are enacted in the form of a state-of-the-art organization, powered by the brain which looks like NASA’s control-centre, and with Woody playing the role of one of million sperms trained to take a plunge into the unknown like a paratrooper.

hmhm.. Woody Allen is my favourite satirist. Haven't seen this one. Should try it !!

Yeah, its worth a try even if the end product is rather inconsistent.

The sheep and the court jester segments are my absolute favorites in the bunch. While as you rightly note not everything works, there is enough brilliance here to make a strong argument to those who have long underestimated this often uproarious comedy from the creative early period. I myself was always a fan, and much appreciate this terrific capsule!

Thanks Sam. Yeah, from what I understand, there are quite a few very strong takers of Woody's early period, when he was still largely into out-and-out comedies. Though I personally prefer his more matured dramedies, there's no denying his ingenuity and creative fecundity in this film, despite its uneven & unpolished nature. Personally, the one on the various organs of the human body appealed to me the most. But yes, the Shakespearean comedy of manners (the first segment) was hilarious as well.