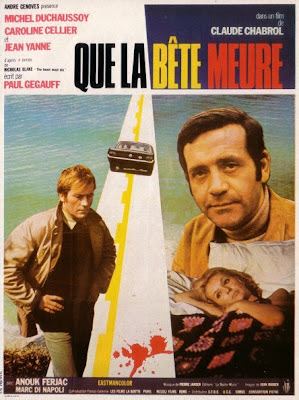 The smart, psychologically intense and slow-burning thriller This Man Must Die, made between The Unfaithful Wife and The Butcher, considered as two of his greatest films, remains aptly representative of the kind of themes, style and characters that one immediately associates with Claude Chabrol. It begins with the nerve-racking shattering of tranquility on an otherwise idyllic day when a young kid gets killed by a speeding car. Charles Thenier (Michel Duchaussoy), the child’s devastated father and a writer, vows revenge against the unknown assailants, and he goes about meticulously tracking them and starts noting down his violent obsessions in his diary. He eventually meets the lady who was in the vehicle – a young, beautiful and vulnerable actress (Caroline Cellier), and begins an affair with her to reach his brother-in-law Paul Decourt (Jean Yanne), the man who was driving it. The clichéd approach would have been to present Paul as a soft and likeable person, thus presenting moral dilemmas for the grief-stricken father. Instead, in a sly reversal of audience expectations, he is presented as an unpredictable, uncouth and a thoroughly vile character. The plot, therefore, was just a device here in this disturbing meditation on the very intent of vengeance and cold-blooded murder as a means of exacting justice and redemption, and a complex examination thereof, leading the film to a memorable climax. Admittedly, the storyline relied on a convenient coincidence, and Paul’s character seemed more like a caricature of evil than a well-rounded person. Nonetheless, this moody and engrossing thriller was excellently performed by the three leads, and comprised of a compelling score.

Always been a little underwhelmed by Chabrol. This one really felt like a disappointment when I saw it for the first time a few years back. Good review Shubs... M.Roca

Thanks Maurizio. Yes, Chabrol's films do at times leave one with a slight underwhelming sense - but I feel that in essence was his core style. His films were more about his personal meditations than the plot per se. And hence, though he's often referred to as French Hithcock, I feel that's a thoroughly inappropriate tag - they were two very different filmmakers altogether with two very different personal signatures.