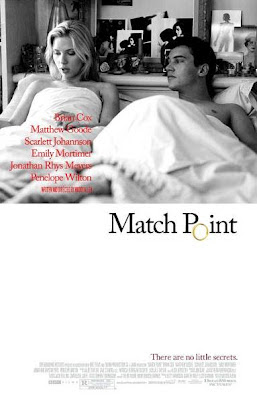 Match Point, his first film in the UK, remains by far his finest work since the anarchic Deconstructing Harry. This was a dark, disturbing and an deadly serious film – the kind he has always loved making once in a while in order to break the trend (Interiors and September come to my mind immediately). Chris (Jonathan Rhys-Meyers) is a former tennis pro who now works as a trainer in an upscale private club in London. There he befriends Tom (Matthew Goode), the son of an insanely wealthy businessman, begins a relationship with his sister Chloe (Emily Mortimer) – who he eventually marries, and even joins his father-in-law’s business. However, his smooth journey up the social ladder and his picture-perfect life gets on the verge of collapsing as he becomes increasingly infatuated with Nola (Scarlett Johansson), the seductive fiancé of Tom and a struggling actress. His life becomes incredibly complicated as he gets involved in a steamy and clandestine affair with her post her break-up with Tom, leading the film to a violent, unsettling, ironic and wonderfully devised climax. Enacted with immaculate restraint by the cast, especially by the highly impressive Meyers as a character caught between two extreme possibilities, the film was, on one hand, an incisive examination of class and how it changes the protagonist (for better or for worse) the more his station blossoms, while on the other it was a darkly cynical meditation on chance, fate and morality – thus making it a fine companion piece to his earlier Crimes and Misdemeanors. The only glitch – it’s difficult to imagine Tim Henman reading Dostoevsky between his matches.

Ha, the last point you make is quite true there Shubhajit, but all in all I am in full agreement that this is one of Allen's best films from his later period and arguably his best European-set film (some would argue for VICKY CRISTINA BARCELONA I know)and it's populated by fine performers and a real London feel.

Great to know you agree on that. Even though Vicky Cristina Barcelona and Midnight in Paris were decent films alright, and though a number of people have opined that these were Woody's best works in recent times, I feel only Match Point would manage to rank alongside his best works from 70s & 80s.