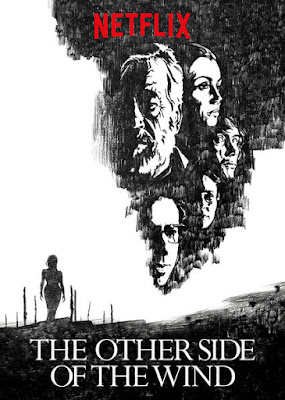 Does The Other Side of the Wind qualify as the stunning swansong of a trailblazing genius or as the anarchic final expression of a mad man? Maybe a bit of both, given its radical brilliance and its crazy, chaotic vision. Made by Orson Welles between 1970-76 intending it to be his triumphant return to Hollywood, but it got increasingly mired in financial, legal and political impasse despite relentless efforts over the years by Oja Kadar, and finally completed and rapturously released a staggering four decades after it’d begun slipping into a vortex, this was – in parallel – an audacious avant-garde exercise, a self-conscious mockumentary, a ferocious autobiographical statement, a wicked media satire, and perhaps unhinged self-indulgence too. Presented in the form of a kaleidoscopic collage of paparazzi footage, it chronicles the final day in the life of renowned filmmaker Jake Hannaford (John Huston) – modelled as much on Welles as on Hemingway and Huston too – as he interacts with, during the private screening of his unfinished movie, his protégé (Peter Bogdanovich) who’s a young New Hollywood director of growing intellectual repute, a Pauline Kael like film critic (Susan Strasberg) who’s vocally disdainful of Jake, and a host of others belonging to his coterie; in a parallel strand, we see sections from his film starring Kadar as an enigmatic, taciturn seductress. Interestingly, while the outlandish hedonism in the party – spectacularly shot with feverish expressionistic splashes – were decidedly Felliniesque, the bleak aesthetics of the film-within-the-film were arguably a parodic nod to Antonioni. The metatextual elements were especially enticing – some deliberate like the auto-fiction aspects, with Bogdanovich doing a deadpan spoof of himself, while others ironic like Jake’s film remained unfinished too like Welles’.