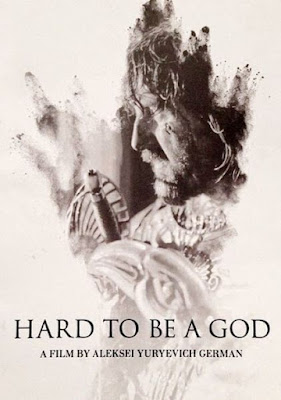 Grisly, grimy, gut-wrenching, grueling – one might run out of gangrenous adjectives while describing Hard to be a God, the gargantuan final film of Aleksei German, and one in which he invested nearly 15 years of his life until his death (it was released posthumously through the efforts of his wife and son). Possibly best known until this for My Friend Ivan Lapshin – his bleak, freewheeling adaptation of stories written by his father – this is a work that’s bound to leave one gutted with its unsettling imagery of a medieval-era civilization at its most hideous, putrefying and barbaric… or, allegorically, humanity at the nadir of its humanism. On surface, though, this was a sci-fi film; adapted from Soviet writers Arkady and Boris Strugatsky’s novel, it’s set in an exoplanet to which a group of scientists have come from Earth in order to observe and study its inhabitants who’re stuck in the vicious loop of the middle ages due to the brutal suppression of a renaissance movement in its bud through the collective massacre of intellectuals, artists and scientists. One of those scientists (Leonid Yarmolnik) has infiltrated the dominant local kingdom where he’s established himself as a nobleman / some sort of a god, and must somehow survive the violent inter-faction rivalries (between the tyrannical “Greys” and fanatical “Blacks”), atrocity against the intelligentsia, rampant slavery and public executions, while also trying to save a supposed intellectual within this quagmire. Through stark B/W photography and on-location realism German created a hellish world filled with decay, squalour, muck and savagery, and in turn provided a metaphorical alternative portraiture of human civilization when stripped of the civility accorded by the arts and the sciences.