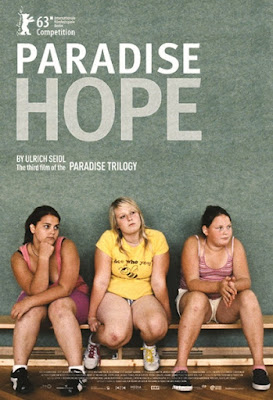 Paradise: Hope, the final installment in Seidl’s cinematically bold and stunningly confrontational ‘Paradise Trilogy’, continued the deeply ironic and oftentimes jaundiced interpretations of the pleasant sounding titles; while “love” was commoditized and exploitative in Paradise: Love and “faith” was oppressive and self-destructive in Paradise: Faith, “hope” was marked by emotional despair and hopeless unattainability here. The formal and visual palettes, too, were immediately distinguishable by Seidl’s rigorous precision, meticulous shot compositions, bleak austerity and deadpan tone. However, these thematic and stylistic continuities aside, this was a surprisingly wistful, tender and melancholic coda to this otherwise lacerating trilogy, and that significantly set this apart vis-à-vis the previous two films. The focus here is Melanie (Melanie Lenz), an overweight 13-year old girl who’s been sent to a summer diet and fitness camp while her mother – possibly unbeknownst to her – is holidaying in Kenya. Despite the strictness imposed by the stern-faced trainers there and physical activities that the adolescents are subjected to, the environs and atmosphere are marked by fun, playfulness, mischief, bonhomie and tranquility, especially thanks to the abundance of youngsters and her friendship in particular with a rebellious and slightly older girl who’s upfront about her sexual experiences. She encounters both frothy hope and intense grief upon getting attracted to the rakish and much older resident doctor (Joseph Lorenz) who pampers her overt gestures of teenage love with cheeky ambiguity even if he desists crossing the no-return threshold in contravention to viewer expectations. Seidl’s teasing flirtation with the moral implications of their supposedly brewing relationship, along with Melanie’s painful coming-of-age upon the rejection and her ensuing heartbreak, formed at once subversive as well as quietly affecting facets.