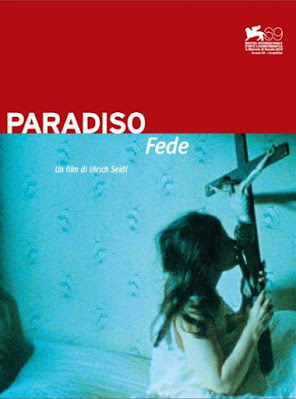 Paradise: Faith, the abrasive and provocative middle chapter in Seidl’s unforgiving, unsparing and thematically-linked ‘Paradise Trilogy’, and arguably also the most powerful of this triptych – it’s bookended on either side by Paradise:Love and Paradise: Hope – is centered on faith at its most violent, virulent, sadomasochistic and political too. And, in an interesting counterpoint to the previous film where the protagonist travels to a lesser developed country in an exploitative search for love, the one here travels within Vienna to exploitatively propagate religion to those who’ve come from lesser developed countries – and these parallel but opposing journeys, in a way, may remind one of Ulrich’s best known work, viz. the darkly brilliant Import / Export. The focus here is Teresa’s sister Anna Maria (Maria Hofstätter), a middle-aged, humourless, guilt-ridden, self-flagellating zealot whose obsessive love for Christ often borders on the grotesque. She takes a holiday from her day job to dedicate time to individual and group prayers – the leader of that right-wing group always ends her missives with the battle-cry to make Austria Catholic again; conduct harsh self-penance for libidinous thoughts – the sexualized form of those punishments may leave ardent believers shaken; and to perform door-to-door evangelism to browbeat vulnerable immigrants into hardline Catholicism – her visit to a paunchy, eccentric man in his underwear was darkly funny in particular. The bare bones nature of her rigorous existence, however, gets upended upon the sudden return of her former husband – a paraplegic Muslim man (Nabil Saleh) who deplores her staunchness and underhanded xenophobia, while having emotional complexities and orthodoxy of his own, and with whom she might’ve shared a tumultuous past – which takes them on a lurid collision course.