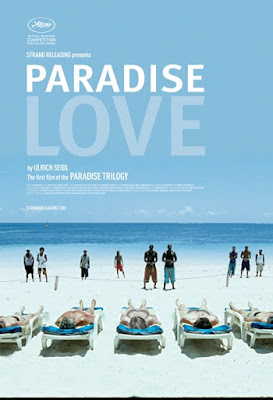 Ulrich Seidl’s Paradise: Love – the first chapter in his pugnacious, audacious and extraordinarily incendiary ‘Paradise Trilogy’, which also comprises of Paradise: Faith and Paradise: Hope, and all of which he jointly wrote with his wife Veronika Franz – is somewhere between a grotesque black comedy and a droll horror film, packed with discomfiting themes of neo-colonial entitlement, casual racism, sexploitation, feminity and lonely women searching for purchasable love. The film’s first scene itself – where a group of mentally challenged folks are shown having fun in bumper cars – made its gleefully provocative stance, bone-dry satirical tone and the underlying poignancy immediately clear. The central protagonist here is Teresa (Margarethe Tiesel), a 50-year old Austrian hausfrau and single mother, who leaves with her sister Anna Maria (Maria Hofstätter) her teenaged daughter Melanie (Melanie Lenz) – the latter two were the protagonists in the trilogy’s next two chapters, respectively – and travels with a group of Europeans for a holiday to a sea-side resort in Kenya. Along with endless sunbathing and being peppered with “jambo” and “hakuna matata” to constantly underscore the exotic nature of this visit for self-entitled Westerners, a key driver for many of the white, ageing, condescending women is sex tourism, and Teresa is no exception to this titillating urge. Hence, soon enough, she starts hanging out with much younger native “beach boys” who shower her with false attention in order to solicit her money, and she in turn hopes to quell her loneliness through companionship and perhaps even love. Seidl captured this harsh dichotomy – where the women are both the oppressors and the oppressed – through a deadpan palette, meticulous visual precision, ultra authenticism, and bold mix of professional and non-professional cast.