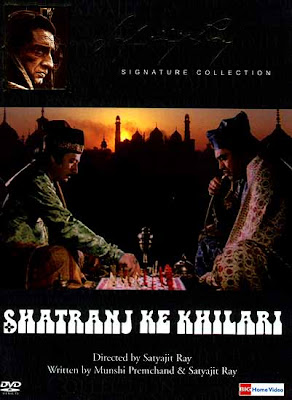 Shatranj Ke Khiladi, loosely adapted from a short story by Munshi Premchand, was the sole movie made by Satyajit Ray in Hindi. Set a year prior to the 1856 Sepoy Mutiny, this beautifully crafted film is a mild satire on the then-existing social structure and mores, and a bemused observation on what could be construed as a microcosmic representation of the events that led to the massive uprising. The movie has two parallel strands. On one hand we have Mirza Sajjad Ali (Sanjeev Kumar) and Mir Roshan Ali (Saeed Jaffrey), two noblemen obsessed with the game of chess and oblivious to the socio-political changes taking place around them, while on the other we have Nawab Wajid Ali Shah (Amjad Khan), the ruler of Awadh, who is more inclined towards the pursuit of arts than matters of administration – which conveniently forms the basis for General Outram (Richard Attenborough) to push for the annexation of the kingdom. The three Indian characters are bound by a common string – their grandiose proclamations of courage and justifying their faux-sense of bravery through illustrations of their long-dead forefathers, and yet at the end of the day acquiescing and continuing in their states of stupor by taking shelters in their intellectual/aesthetic delving. The nuanced performances of the cast was complemented by the captivating voice-over provided by Amitabh Bachchan – the narrator doesn’t just provide us with excellent facts, but also amused reactions at the tragi-comic chain of events. Ray marvelously captured the ennui, idiosyncrasies and elegance of Lucknow’s famed erstwhile elites, noblemen and kings through this charming and delightful audio-visual feast.

Agreed - this is one of Ray's late masterpieces and one of his best films. It is also a great example of Ray's ability to convey ideology without politicising every inch of the frame. Excellent casting.

Couldn't agree with you more. The best part was that Ray never took sides while making the movie, and he managed to capture the best & worst of both sides without really spelling out everything. It sure remains an underrated gem from Ray.

Another film from the master director to look out for, reviewed by a master himself, master reviewer Shubhajit. ;-)

We always look forward to your reviews of Ray because you really get what he was about. Your writing is not just technically sound (we're weak in this aspect but reading your blog has helped us understand more) but filled with a sense of poetry as well. You're definitely not an amateur reviewer. If you do put out a book, it'll sit proudly next to Leonard Maltin's or Roger Ebert's. :)

Haha, you're being too kind my friend. I most certainly do not deserve such effusive praise. I'm just another guy who loves movies and loves jotting down his views regarding the same - nothing great in that really :)

But yes, as for Ray, I'm completely with you on that - he undoubtedly was a great master of this craft, and I'm an huge admirer of his genius.

Thanks a lot buddy for the kind appreciation. You sure have made my day :)