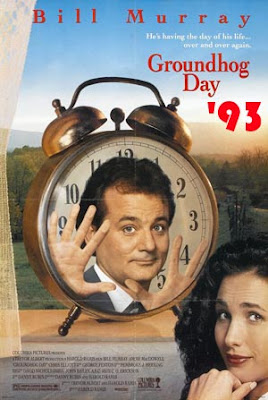 A lot of movies try to teach us the importance of life and preach us as to how we should appreciate the fact that we’re alive; suffice it to say, most of such corny didacticism do not manage to pierce our skins, leave alone touching our hearts. Groundhog Day successfully managed to be the rare aberration, an outlier, to the above statement. Bill Murray has the wonderful ability make one laugh as also touch a chord or two simply through his facial expressions, and he used that caliber memorably in this deeply enjoyable pop-philosophical tale of life and love, through his enactment of Phil, a cynical journalist whose misanthropy is as deep-set as it is profound. Sent on an assignment he loathes - that of covering the titular annual ritual, held in a small, peaceful town – along with his producer Rita (Andie MacDowell) and cameraman Larry, he goes about his job with his usual sense of apathy. However, despite his eagerness to leave the place as soon as possible, he gets time-warped and trapped into living the same day over and over again – and this turns out to be particularly bizarre since none of the other people seem to be realising his strange predicament. Over the course of this bittersweet movie we see him experiencing the entire gamut of emotions – from desperation and boredom to happiness and contentment, and his immensely affecting transformation into a man who starts realising how deeply he is in love with Rita and appreciating the beauty of being alive. This really turned out to be that rare high-concept movie with the ability to enthrall emotionally rather than just impress viscerally. And yes, it also managed to be that rare life-affirming movie that worked.

Shubhajit, wonderful piece and a magical, hilarious film. This is one of Bill Murray's crowning achievements, the others being Rushmore and Lost in Translation. This film to me gets even better with age, a sort of play on a type of scenario not completely apart from something like It's a Wonderful Life. It has that "life lesson" at its heart and a masterful performance. I also really like Andie McDowell in this film. She's so cute!

Thanks a lot Jon. Yes, completely agree with you, this was my second viewing of the film and I liked it even more than when I'd watched it for the first time a few years back. As I mentioned in my review, it sure is one of those rare life-affirming films that never seem corny or preachy - that's in my opinion remains the director's biggest achievement. Murray is just fantastic in it. And yeah, Andie MacDowell indeed looks pretty cute :) Thanks my friend for sharing your enthusiasm for this film.

Hi Shubajit, I am not able to put this movie in any of the genre like drama, science fiction or comedy. Its such a fantastic movie that touches the heart of viewer. The conversion of Bill Murray from cynic to a humble man was well depicted. loved this film... thanks for reminding !

Thanks buddy. Yes, it is difficult to classify this film into any well-defined genre or type. As for Murray, his transformation as well as his relation & interactions with Andie MacDowell's character have been quite beautifully captured. A touching film indeed.

Yes, one of the great contemporary comedies, and an unqualified triumph for Bill Murray, whose greatest film this may well be. I agree it's as much a drama as it is a comedy, and there are profound life lessons to be taken for one of the greatest of all screenplays.

This is one of your truly great capsules pieces!

Thanks a lot Sam for the appreciation. Yes, as I mentioned in my review, its that rare "life-affirming" movie that worked at various levels without ever being preachy or didactic. The screenplay and Murray's acting are the hallmarks of this film, as you rightly pointed out.