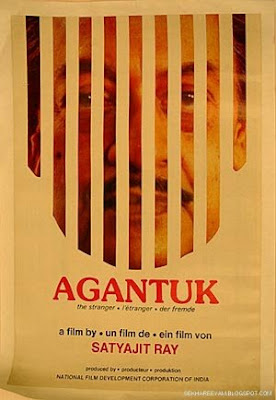 The final movie of Satyajit Ray, a giant in Indian, as well as, world cinema, Agantuk beautifully portrayed the distrust and paranoia that have become parts of urban social fabric and milieu. The movie, adapted from a short story from Ray himself, is about the unexpected arrival of a long-lost uncle (Utpal Dutt), who had left home at a young age in order to lead the life of a wanderlust, into the lives of an upper middle-class Bengali family (played by Dipankar Dey and Mamata Shankar). The repercussions of his return, after 35 years of complete absence, makes the family traverse the complete cycle of distrust, dilemma, redemption and contentment. The swansong of the master auteur also ironically tells us, that howsoever much might we know the genius (Ray, or for that matter, any artiste), the man behind the social veneer would always remain a stranger to us all. The movie was also a swansong for the veteran thespian and one of the most versatile actors ever to face a camera in India, Utpal Dutt, who played the eponymous role of the stranger. The evolving character dynamics between the three principal protagonists as also the couple’s young son and their inquisitive friends (both Rabi Ghosh and Dhritiman Chatterjee provided interesting cameos), have been exceptionally well covered – with subtlety as also with conviction, in this gently paced and wonderfully enacted movie. The movie – in equal portions an affecting drama and a light comedy – also provided a number of probing questions on what constitutes a civilization and what it means to be a part of the human race – covered through a number of powerful dialogues.

Having recently published a top 10 list of Indian films from the 2000s, I have a rejuvenated interest in the country's films. I must check this out. Excellent review Shubhajit.

Thanks a lot Dan. Though I wouldn't rank it among Ray's greatest masterpieces, its an excellent movie nonetheless. This was in fact my 3rd or 4th viewing of it. By the way, I'd be read your top 10 list of Indian films from the 2000s.

There are some movies that connects to you. Ones that immediately resonate with the side of the brain which appreciates art and cinema."Agantuk" is pone such movie for me. One of the first Ray movies I had seen (along with Nayak , another movie i immediately commented on when you reviewed it Shubho), this movie is a masterpiece for one big factor. The master director's master actor Utpal Dutt (Utpol Dutto in bengali which gives it a special feel!!). Agantuk is a movie whose dialogues provoke thoughts!! The so called intellectual strata of the society which sees anything different from itself as abnormal. The art of story telling at its best by Ray, the film pays fine attention to vey small details!!!. One laments the fact that it was Ray's last, often wondering that what other gems the master could have churned out if he was alive. Clearly death doesn't understand cinema because if it did Satyajit Ray would be still alive!!! Very rightly pointed out by you Shubho, Dhritiman "Pratidwandi" Chatterjee, and Rabi "the Evergreen" Ghosh play powerful short roles which is not surprising at all!!.. Agantuk is a definite watch and Shubojit excellent review. I would give it the 5 stars. 4.5 that you gave and .5 for my own personal partially towards this movie and for Utpol Dutto !!!

Thanks a lot Avinash for the good words and for sharing your love for this underrated gem from Ray. The fact that this was the last directorial venture of Ray did add layers of emotional value for this movie. It sure would have been wonderful had Ray managed to make a few more movies - what more could a Ray aficionado like us could ask for. And as for Uptal Dutt, it was a treat watching him here, as it has been watching every movie of his that I've managed to catch. Thanks again buddy.

My comment is as much for the post as it is for your awesome blog. Excellent work Shubhajit ! :)