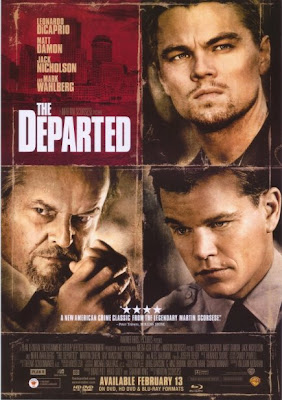 Martin Scorsese seemed to have been losing his touch through most of the 90’s and 2000’s (the documentary No Direction Home was perhaps the sole exception). With The Departed he made a spectacular return to the kind of high-voltage and pulsating gangster movies he last attempted with Goodfellas and Casino. Gritty, edgy, hyper-violent, unabashedly profane, terrific use of background score, the city playing a vital role in character-building – it sure seemed like a work by the Marty of the old. An American rendition of the popular Hong Kong undercover-cop thriller Infernal Affairs – the movie is set in the Irish-Catholic milieu of Boston. The labyrinthine plot goes as follows: Billy Costigan (Leonardo DiCaprio), who’s freshly out of the police academy, is coaxed by his bosses (Martin Sheen and Mark Whalberg) into becoming a “rat” in the outfit of the psychotic and powerful mobster Frank Costello (Jack Nicholson); meanwhile Collin Sullivan (Matt Damon), who was handpicked at a young age by Costello, has managed to infiltrate the Boston police force; and thus starts an arresting game of cat-and-mouse. A tale of shifting and dubious loyalties and identities, this compelling and visceral character-study is reminiscent of the kind of gang violence and street justice Scorsese unforgettably portrayed in Mean Streets. Nearly everything worked for the movie – powerhouse performances by the superlative ensemble cast, kinetic and near-flawless script filled with darkly funny irony, exceptional editing (the movie managed to proceed at a frenetic pace without ever resorting to over-editing), great buildup of mood and tension – thus making this, the cover version, far superior than the original itself.

Yep, I quite agree Shubhajit, that everything clicks in this glorious return to form for Scorsese, and for my money this exceedingly tense and entertaining cop thriller works on re-viewing. The director's birthday was Friday, when he appeared at the Film Forum to introduce Powell & Pressberger's THE LIFE AND DEATH OF COLONEL BLIMP, which he had championed for decades. And of course as we all know his HUGO (based on the Caldecott Medal winning "The Invention of Hugo Cabret") opens this coming Wednesday.

This is a dead-on, engaging piece of writing!

Thanks a lot Sam. You made a great point regarding repeat viewing. I'd in fact watched it for the first time when it was released, and had quite liked it then. I suddenly felt the urge or watching it again, and I realized my opinions of the movie hasn't changed in the meantime - it sure ranks a great comeback for Scorsese. As for Hugo, it could be interesting, but to be honest, I'm not really counting much on it.

Great film! Wahlberg is hilarious (not sure if he's meant to be) but perfect in his role. Love Leo's coiled/tense performance too.

I agree, Wahlberg was indeed a perfect fit for his role, as were every member of the cast. Thanks Pete.

Departed actually doesn't hold a candle to Infernal Affairs. I watched them back to back.

I too have watched both, though not back to back. And, as I mentioned in my review, in my opinion this is far better than the original. To each his own, I guess.

The Departed, the language and violence put me off I'm afraid, however I still regard Scorsese as a living legend for his other work, which my recent Scorsese review blogathon obviously indicates.
Perhaps Hugo (2011) is more my cup of tea, who knows ( :

Yes, I do understand the concern you've raised regarding the movie, as profanity and violence can be off-putting for most. Great to know about your admiration for Scorsese's body of work in general, as I too have loved a number of his movies - some of which I consider masterpieces in American cinema. Thanks for stopping by.