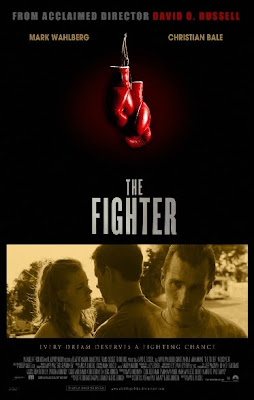 Boxing a favourite among filmmakers; after all, it is one of those rare sports that manages to capture the interplay between physical brutality and emotional upheaval. The Fighter, a real-life chronicle of the arduous journey to success and championship of welterweight pugilist “Irish” Micky Ward, is a classic underdog story. Ward, played by Mark Wahlberg, is a middle-of-the-rung boxer belonging to a working class neighbourhood whose life is beset by a plethora of obstacles – lack of any stable income, broken marriage, an overbearing mother (Melissa Leo) who doubles as his manager, an attractive and outspoken but equally possessive fiancé (Amy Adams), and a drug-addict elder brother (Christian Bale) – a former boxer still basking in the glory of having knocked down legendary boxer Sugar Ray Leonard around a decade back and who now acts as his trainer. Triumph against all odds by overcoming a series of personal impediments and setbacks tends to make for a good story, and if the film happens to be well-made like this one, then there’s nothing like it. Thanks to the measured direction, the well-chiseled script, moody atmosphere and a keen eye to details, this gritty urban docudrama managed to perfectly combine grim kitchen-sink realism with a rousing and thoroughly uplifting spirit. The most impressive aspect of the film, along with the well-crafted boxing scenes, happens to be the excellent performance of Bale as Dickie Eklund, whose passion for the game is outweighed only by his fondness towards his younger brother.

I think you liked this a bit better than I did. I actually found the boxing scenes to be the least convincing part of the film, but the acting was pretty good, especially from Adams, who gives my favorite performance here. But I love her, so I guess I'm a bit biased. ;)

Haha, yeah, its easy to fall in love with Amy Adams - she's quite a beaut! :)

The acting of the entire cast was reasonably good. Know what, I actually checked the boxing matches of Micky Ward on Youtube after the movie. I was really surprised at the near-exact recreation of the original matches!!!

I liked this less than you. The acting was great, though.

That's understandable. Thanks for stopping by.

Shubhajit, I am no fan of this film, but still appreciate the superbly penned assessment of what you perceive to be the strongest qualities that propel it. Perhaps I just tired of boxing movies, but for me the domestic drama was over-the-top, and indepted to other films. Bale and Adama were best of all.

Thanks Sam. Yes, I do understand and appreciate the points you've put forth. Well yeah, given the number of movies that have been made on boxing, its certainly possible for one to get tired of them.