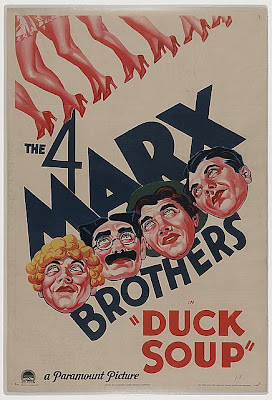 Duck Soup is often cited as the greatest work of the inimitable Marx Brothers. Brisk to the point of keeping one off-guard right through its crisp length, this was a madcap political satire on warmongering dictators – the kind of people who were especially in vogue when the movie was made. This unapologetically irreverent, outrageously funny, and incredibly witty movie is set in a fictitious country called Freedonia which is nearly broke. The country’s principal benefactress agrees to donate money to save the country, and in return the wisecracking Rufus T. Firefly (Groucho Marx) is made its President. Chicolini (Chico Marx) and Pinky (Harpo Marx) are two bumbling spies sent by the ambassador of the neighbouring country Sylvania, but end up becoming parts of Freedonia’s army when war breaks out between the two countries. The brilliant and acerbic one-liners delivered by Groucho in his unique style, as well as the movie’s various plot elements in general, lampooned everything on sight and beyond. And some of the gags it is filled with are worth their weights in gold – the extended mirror pantomime sequence could very well feature amongst the most astounding and ingenuous sequences ever concocted and captured on a motion picture camera. The three brothers, at times, seemed to be in a zone of their own. The degree of farce and slapstick did at times dilute its underlying theme, but it remains a landmark film for its no-holes-barred indictment on the absurdities of war, as also for its sheer entertainment quotient.

"The degree of farce and slapstick did at times dilute its underlying theme, but it remains a landmark film for its no-holes-barred indictment on the absurdities of war, as also for its sheer entertainment quotient."

Fair enough Shubhajit. It is every one of those and then some. Leo McCarey was the most gifted of the Marx directors, and DUCK SOUP is usually considered the masterpiece, with A NIGHT AT THE OPERA and HORSE FEATHERS pushing real close.

Thanks a lot Sam for the appreciation. I've rarely laughed so much as I did while watching this film - it managed to brilliantly combine both cerebral humour and slapstick of the highest orders. This most certainly remains a seminal work in this genre.

Based on your rating, I will add Duck Soup to my ever growing too-see-list, Marx Brothers are a gap in my cinephilia no doubt.

I've heard positive things of the comedy It's a gift (1934) starring WC Fields. Not got round to it either yet.

Well, to be honest, Marx Brothers had been in my rather large to-see list as well :)

Yes, do go for Duck Soup, as it most certainly stands as a landmark movie. As for me, loads of other Marx Brothers' movies beckon me.