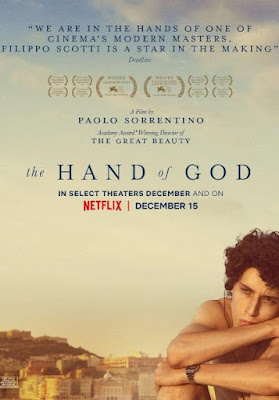 Naples, football, cinema and the tragicomic circus of life coalesced into a zany, colourful, bawdy, and elegiac spaghetti – with a zestful sauce thrown in – in Paolo Sorrentino’s delightful semi-autobiographical film The Hand of God. While Fellini’s magisterial La Dolce Vita had inspired his maximalist gem The Great Beauty, the Italian genius’ ribald and kaleidoscopic ciné-memoir Amarcord was the springboard for his funny and wistful reflections on his coming-of-age as a soft-spoken, rudderless and impressionable teenager – albeit, surrounded by chaos and carefree exuberance – in 80s Naples. And, as the title suggests, the mesmeric shadow of the supreme Argentinian wizard Diego Maradona played a pivotal role, as did the philosophic figure of Antonio Capuano (Ciro Capano), in whose film The Dust of Naples then 18-year-old Sorrentino received his first writing credit. Fabietto (Filippo Scotti), who lives surrounded by his Communist father Saverio (Tony Servillo), prankster mother Maria (Teresa Saponangelo) – they made for an indelible and hilariously idiosyncratic pair – his protective siblings, a headstrong Baroness as neighbour, and a riotously eccentric extended family comprising of a buxom but troubled aunt (Luisa Ranieri) who he lusts after, an expletive spewing grand-aunt, a leftist uncle who celebrates Maradona’s titular goal against England in 1986 World Cup – which he followed with a moment of sublime magic – by calling it an impudent middle-finger to the imperialist opposition, etc. These, in turn, were enmeshed with the euphoria of experiencing the patron saint of football donning the Naples jersey, his befriending a devilish cigarette smuggler, a debilitating tragedy that deeply marks his life, and discovering his future vocation, along with a gently evocative tone, lively visual compositions, distinctive flavour of the 80s, mythologization, and an array of emotions.