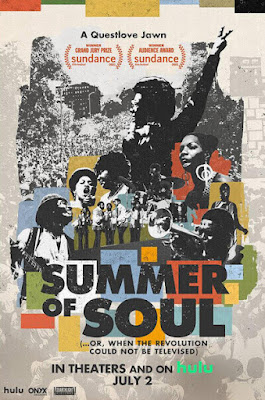 American musician and writer Ahmir “Questlove” Thompson’s Summer of Soul is a rousing and immersive celebration of black pride, music and culture, vividly interlaced with politics, history and the quintessential zeitgeist of 1969. Music promoter Tony Lawrence – “a hustler, in the best sense” – arranged the Harlem Cultural Festival – a free concert, featuring a stunning assemblage of black artists – at Mount Morris Park in Harlem, New York, over 6 weekends in the summer of ’69. The event, which covered an extraordinary range of genres – blues, jazz, soul, gospel, pop, rock, ballads – was attended by nearly 300,000 people, and with security by the Black Panther Party, was never televised as all attention was on Woodstock, held just a few kilometres away and which became the symbol of counterculture movement at the time; as a result, the priceless tapes containing 40+ hours of footage remained lost for 50 years. Questlove, while bringing this thrilling piece of history to life, also ensured that its context, impact and memories were eloquently captured too. Thus, he foregrounded this mosaic of exhilarating performances – by Stevie Wonder, B.B. King, Nina Simone, Max Roach & Abbey Lincoln, The 5th Dimension, Mahalia Jackson et al, buoyed by an ecstatic crowd in glorious afros and colourful dresses – against the era’s volatile backdrop – assassination of Martin Luther King, Harlem riots, poverty and hostile racism – while also getting a few of the festival’s attendees to reminisce from so many years back. Two moments especially stood out – Simone’s electric rendition of her politically defiant song “Young, Gifted and Black”, and attendees brushing aside the Apollo 11 moon landing – which too happened while this was underway – vis-à-vis the importance and relevance of this festival.