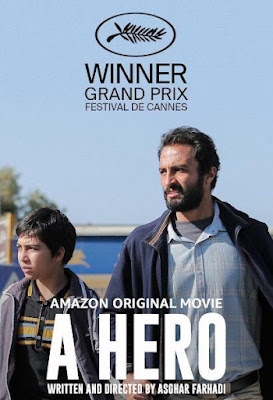 A Hero was simultaneously taut, fragile and messy; as gripping as a thriller with its spare aesthetics and gradually unfolding narrative, despite in essence being a parable; and operated as both murky morality play and striking socio-political commentary. These aspects, aside from making this a sharp and well-crafted film, also placed it firmly in Farhadi’s excellent canon and continued bolstering the Iranian filmmaker’s position as a modern-day auteur with a distinctive voice, style and form. The tongue-in-cheek observation shared on this film by some reviewers, viz. “No good deed goes unpunished”, did provide an apt summarization of its wry and bleakly ironic undercurrents. Rahim (Amir Jadidi) is a mild-natured single father who’s incarcerated in a minimum-security prison for a huge debt that he owes his abrasive former brother-in-law (Mohsen Tanabandeh) with whom he has an acrimonious relationship. While out on a temporary leave from prison, he’s persuaded by his supportive girlfriend (Sahar Goldoost) to use the proceeds from a handbag containing several gold coins – which she’d fortuitously found – to pay off his debts. However, when he realizes that their worth isn’t enough to get his sentence commuted, he decides instead to do the right thing by returning the bag to its rightful owner. This noble act propels the sheepish Rahim to local stardom – he’s projected as a model convict by the prison authorities, supported by a charity for fund-raising, and hailed as a hero by the media – but the adulation, unfortunately, proves to be a distressing double-edged sword on account of toxic gossips and aspersions fuelled by the social media. The film’s muted and exquisitely composed parting shot provided an especially poignant coda to the hysteria that preceded it.