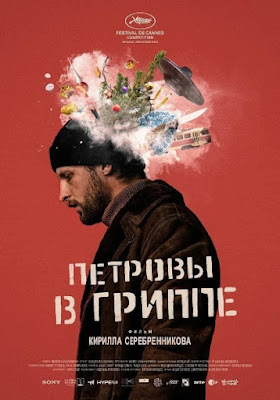 Petrov’s Flu, Kirill Serebrennikov’s first production since his release from house arrest – ostensibly on charges of embezzlement, though allegedly as retaliation for his outspokenness – was at once grand and intimate, and in turn alternatively brash, flamboyant, nightmarish, anarchic, surreal, poignant and personal. And this staggering tonal breadth was accompanied by bravura filmmaking, formal audacity, freewheeling structure and thrilling fusion of a myriad political, historical, pop-culture and psychoanalytic symbols. Adapted from Alexey Salnikov's novel Petrovy v Grippe, this dizzying fever dream of a movie portrayed a day in the life of its titular protagonist – albeit one that stretched and twisted like a hyper-elastic rubber band – started on a chaotic note and became deliriously eccentric as the unpredictable narrative progressed, and switched between “real” and Freudian netherworld – a cesspool of paranoias, fantasies, desires, hallucinations, memories – at breathtaking frequency. Petrov (Semyon Serzin) is a comic book artist losing his sense of sanity while on the grip of a nasty flu in a volatile, pandemic-stricken Russian society. The frenzied night begins with him on a violently chaotic bus ride and joining an anarchist group eliminating wealthy oligarchs, and things kept going bonkers thereon. His librarian wife (Chulpan Khamatova), conversely, often transforms into a murderous superwoman. Meanwhile, as this otherwise struggling couple are arguing about taking their kid to a Christmas party, we’re taken into Petrov’s repressed memories – involving a striking, emotionally vulnerable woman (Yulia Peresild) with a sexually fertile mind – who he’s haunted by. Dazzling images of messy exteriors and sterile interiors, sepia-toned recollections, and muted B/W sections, coupled with an eclectic score – ranging from grungy heavy rock to mournful accordion-led folk tunes – made this unhinged work all the more visceral and fascinating.