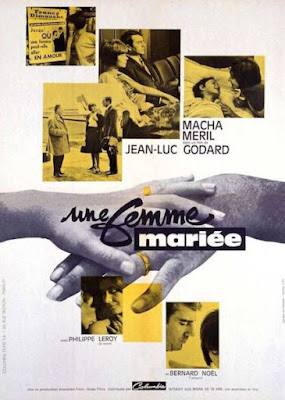 During his flamboyant, freewheeling and eclectic Nouvelle Vague phase, alongside his dizzying pastiches on, homages to and subversion of Hollywood’s genre cinema, he also made a string of brilliantly provocative sociopolitical commentaries – both overt and covert – through a diverse mix of themes and forms. One memorable subset of the latter were ones delectably centered on women protagonists; like the enormously amusing Une Femme est une Femme and the marvelously rigorous Vivre Sa Vie, Une Femme Mariée falls emphatically in that subcategory, even if it often gets lost amidst the two dazzling films that this was sandwiched between, viz. Bande à Part and Alphaville. That’s not too say that this wasn’t lively or adventurous; in fact, despite its stunning restraint – somber pacing, elegant B/W picturization, elaborate fade outs, hushed tones – this was quintessentially Godard in his sardonic portrayal of rabid consumerism, a culture of superficiality through bombardment of advertisements on TV and fashion magazines (satirized through wry pseudo and surrogate ads), social prudishness vis-à-vis casual adultery, and general apathy to ongoing Auschwitz trials (in an indication of shallow political memory and how people had already moved on from WW2 and the Holocaust). And thus, despite not being openly provocative, like say Le Petit Soldat or Pierot Le Fou, it still earned the displeasure of censors, resulting initially in a ban, and thereafter a release only upon a change in its title (viz. changing of ‘La’ to ‘Une’). The plot – deliciously filled with ambiguities, wry asides, rambling conversations and seductive montages that the movie begins and ends with – revolved around Charlotte (Macha Méril), the eponymous married woman, who’s entangled in a ménage à trois with her affluent husband and extramarital boyfriend.